Within iOS 8, the typing experience has improved dramatically. Not only has Apple now made it possible for users to download their favorite third-party offerings like Fleksy, Swype and SwiftKey, but the native keyboard is also far superior to the lackluster native arrangement that users have endured for the past seven years. The autocomplete feature, in particular, will estimate the next word in your sentence, writing out your body of text through a combination of guesswork and learned algorithms. But while this is useful for your everyday typist, one YouTuber has taken things a step further by allowing the stock feature to essentially write its own song. The result is pretty hilarious, and below, you can check it out.

While these autocomplete features are often useful for helping you get the next couple of words, they do often go off on a nonsensical tangent if left completely to their own devices, and in the case of Jonathan Mann’s iOS Autocomplete Song, this is exactly what happens. 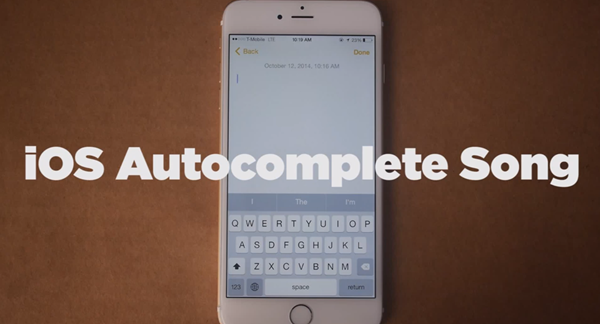 Mann is, for those unfamiliar, a popular YouTube artist that has made a name for himself by writing and uploading original songs on a daily basis, and given his affinity to Apple and its product line-up, has regularly referenced the company’s products along the way.

The niche of his channel is quite incredible, and it’s miraculous that even after many years of running it, he still manages to produce original songs every single day. In the case of the iOS Autocomplete Song, it’s by no means a masterpiece, but with that said, still has a nice ring to it, and while Siri has proved how much we all seem to love listening to computers-generated chatter, we think you’ll also get a couple of laughs out of this as well.

Mann has also covered songs relating to WWDC, Siri and even Antennagate in his time, and given how much attention the apparently over-hyped Bendgate managed to yield, it’s perhaps surprising he didn’t indulge in another stroke of lyrical genius when that particular incident went down.

Anyway, check out the iOS Autocomplete Song embedded below, and as always, be sure to leave your thoughts in the comments section.