As well as opening up the keyboard aspect of its mobile software to third parties, Apple’s iOS 8 has also treated the stock offering to a much-needed overhaul. The autocorrect-befuddled experience that users had begrudgingly grown accustomed to was certainly below the standards being set on Google’s Android, but as well as introducing some SwiftKey-like features to the iOS 8 typing repertoire, Apple has also brought a more substantial predictive text to the fore. Not only will it correct your sentences within the context of what you’ve written before – unlike Auto-correct for the most part – but it’ll also have a pretty good pop at guessing the next word in your sequence. One cartoonist thought it would be interesting / entertaining to see whether iOS 8’s new keyboard could pick up on famous movie quotes using predictive text, and while it didn’t exactly come up trumps, it did produce some quite hilarious alternatives.

The predictive text feature may seem revolutionary for those who’ve continued to use iPhone since its inception, but as users on Android will know only too well, the likes of SwiftKey and Swype have been the lazy typist’s perfect companions for years already. 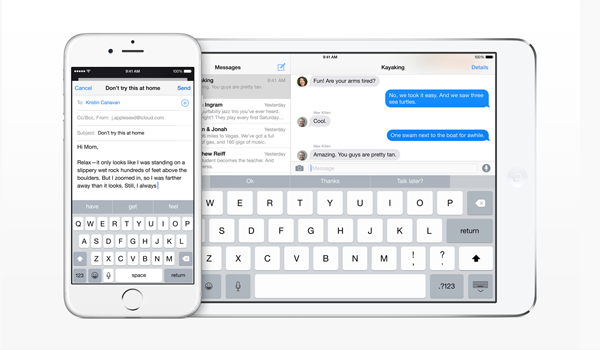 Still, as fashionably late as ever, it’s good to see that Apple has enhanced functionality in this regard, and the more you use the new native keyboard, the better it seems to get at guessing what you’re going to type next. Of course, it seems like magic, but it’s only basic learning and algorithms that allow iOS 8 to seemingly predict the future, and while it may quickly help you to repeat those "hey, how have you been" messages to people you talk to infrequently simply by typing the "h" of the first word, how does predictive text react when faced with the first few utterances of famous movie lines?

Randall Munroe, cartoonist of xkcd, sought to find out by keying in some famous quotations and making a little comic strip out of the resulting phrases as churned out by the iOS 8 keyboard. The beginning of the famed Scarface line of "say hello to my little friend," in reference to the gun, comes out as "say hello to my little sister and my mom and my dad and my friends" if you leave off the final word and let iOS do the rest, and as you’ll see in the little comic, there are plenty of other great alternatives to those movie quotes we’ve all heard before. Check it out below: 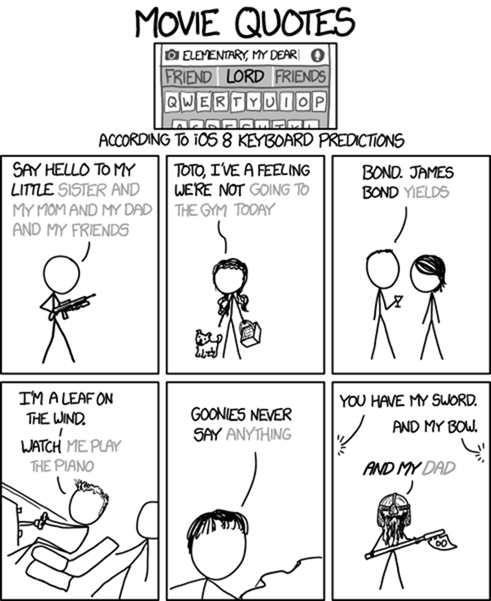