iOS 8 has brought a considerable amount to the table in terms of features, many of which are specific to the iPhone 6 and iPhone 6 Plus. With larger displays, there’s definitely something of a learning curve involved for those long-time iPhone users accustomed to much less real estate, and so to make it easier for smaller fingers and thumbs to reach all of the UI elements, Apple introduced a neat feature called Reachability. As suggested by the name, the implementation enables iOS 8 users on iPhone 6 or 6 Plus to reach the upper tiers of the interface with two light taps of the Touch ID fingerprint sensor, which pushes the entire UI downwards, and although your iOS 7-running device mightn’t necessitate such a feature, the jailbreak community has nonetheless obliged.

The tweak, called Reachability7, lists Activator as a prerequisite, and once installed, lets you enjoy iOS 8 Reachability right from iOS 7 on any iPhone, sans the iPhone 6 /6 Plus of course. You can select whichever activation method you feel most comfortable with via the Settings app, which also allows you to select the shift height of Reachability7 to whatever you like. Pretty handy if you’re asking us. 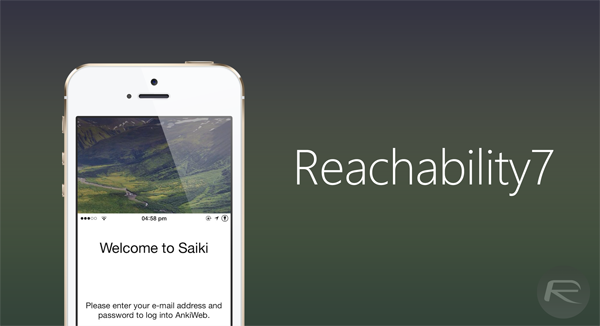 One suspects that if there was a genuine need for a Reachability-like feature on a sub-4-inch display, Apple would probably have come through with it at some point between the release of the iPhone 5 and the iPhone 6. Still, whether you have small hands, wish not to stretch your digits, or simply want to try out a feature reserved for those on iOS 8 as you retain iOS 7 for jailbreak purposes, be sure to pick up Reachability7 from the BigBoss repository.

It’s absolutely free of charge, and having tested it out for a brief moment on an iPhone 5 and our trusty iPhone 5s, we can confirm that it works precisely as advertised. In fact, it’s everything you’d expect from a tweak of this nature, and gets the job done in a very minimal fashion.

Download it, give it a whirl on your iOS 7 running device, and as ever, do be sure to leave your thoughts and comments with us below.