Apple has never been one to dive head-first into a new mobile craze, preferring to hold back, refine the process or feature, and join the party fashionably late. Samsung may be on its fourth top-end phablet already thanks to the dual-release of the Galaxy Note 4 and Galaxy Note Edge at last week’s IFA, but three years after Berlin played host to the original Galaxy Note, Apple today gave those who craved iOS over a larger canvas something to savor. In the run-up to today’s events, it was suggested that Apple’s device would include a ‘one-handed mode’ for comfortable use of a potentially unwieldy device, and with the announcement, we got a taster of “Reachability.” Now, we have a video demo to gawk at.

Most of us have used devices with 4.5-and-up-inch displays, and while typing a message or browsing can be okay with one hand, it’s often a strain when trying to access certain functions. Apple has clearly thought about the ergonomics involved in using such a large handset, and as well as placing the power button on the side of both the iPhone 6 and the iPhone 6 Plus, it has also included this vital software feature that promotes both productivity and comfort. 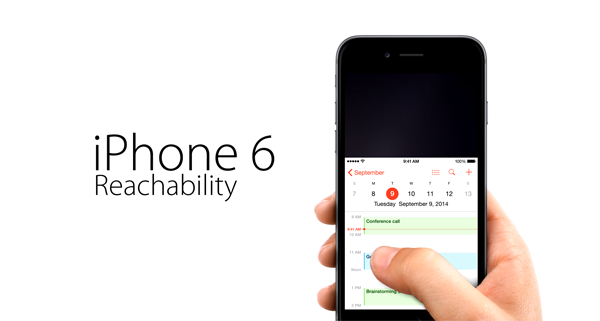 With a double-tap of the Home button, which can always be reached using the thumb, the display moves downwards, meaning UI elements at the top are closer to the bottom, and in turn, allows the user to reach the entire interface without straining or using two hands.

We’ve seen a similar tactic deployed across Android, though not refined, and as you’d expect of an Apple software implementation, it appears to work smoothly. Obviously, we’d need to test it first-hand before making any definitive judgments, but with a simple double-touch, the interface slips down, and the inaccessible half of the UI becomes, well… accessible.

A short Vine clip shows only how the feature works, and doesn’t exactly offer much of an in-depth insight. Still, as you’ll notice, it’s slick, appears to work as it purports, and although it’s likely that many, many iPhone 6 / 6 Plus users will go for months without noticing its presence, it will prove an essential feature to those with smaller hands.

Check out the short clip below, and let us know what you think of Reachability in the comments section.