When you’re one of the largest smartphone makers in the world, not to mention a major manufacturer in several other household electronics as well, having massive marketing budgets is neither major nor surprising. Thus, when we see Samsung come up with creative and unique advertisements for its smartphone lineup, we’re not really surprised. This holiday season, Sammy’s marketing team has again done a great job of making Christmas and the winter season about its Galaxy S5 flagship smartphone, using three S5 devices to bring to life a real snowman.

The new ad, which was prepared specially for the holiday season, uses the three Galaxy S5 smartphones to play animations of two eyes and a beating heart, whilst they are inserted inside an actual snowman with holes left to view the devices’ screens, essentially giving the snowman a feel that it has an actual beating heart and blinking eyes. The entire ad, other than being comical, is a great play on the IP67 certification that Galaxy S5 holds, which makes the device waterproof for an immersion of 1 meter up to 30 minutes. 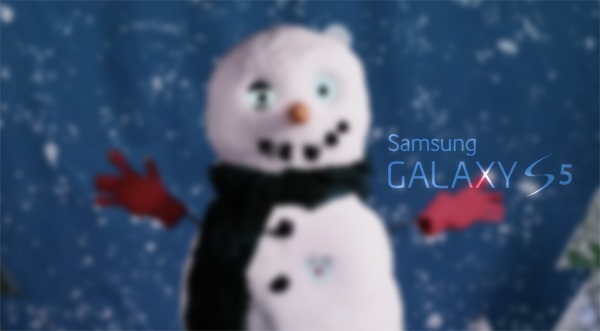 While you watch the commercial for yourself, you’d notice the eerie resemblance to Scooby Doo’s “doobie doobie doo” through the commercial’s soundtrack. It’s a little annoying, in my personal opinion.

Creativity in marketing approaches is something we have come to see and expect of tech giants in particular, and a lot of them have delivered a number of gems during this last year. Why tech companies? You see, when you live by the motto of innovation, it’s natural to expect it reflect in your marketing strategy as well. Thus, during 2014, we got to see great ads from Microsoft, HTC, Apple, and some others from Samsung as well, which not only showcased their devices in a more creative and original manner, but also hired some really big names to do so. A good ad (such as this one) generates a lot of publicity, especially thanks to the tech blogosphere, and Samsung surely has caught our attention through its “magical” act of bringing a snowman to life!

What do you think of the video? Do you believe Samsung has done a great job at showcasing the tough nature of the Galaxy S5 using this ad? Do share your thoughts with us on the matter.