When things are going wrong, they can really go catastrophically wrong. That’s exactly what the folks at Samsung are finding out in abundance right now, having already endured not just one smartphone recall, but two.

The Galaxy Note 7, following those recalls, is no longer available for sale and will forever be remembered as the smartphone which, for two months at least, brought Samsung to its knees. But just when the company may be thinking that things couldn’t get much worse, one very high profile person has seen fit to stick the knife in just one last time, and we suspect it’s going to leave Samsung smarting for a good while yet. 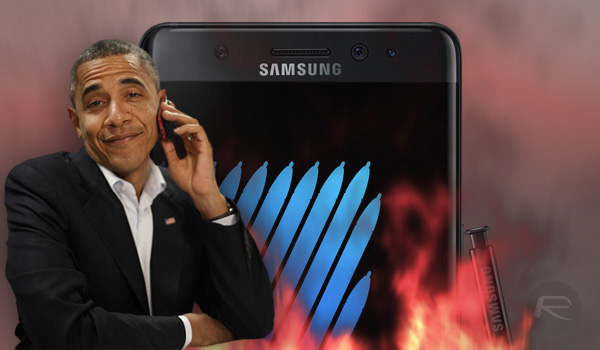 When the President of the United States takes your company’s darkest hour and folds it into a joke, you know things are bad. That’s exactly what happened during a speech about the Affordable Care Act at Miami Dade College in Florida, where the President used Samsung’s fire-related Galaxy Note 7 problems as a way of explaining why Obamacare should stick around.

When one of these companies comes out with a new smartphone, and it has a few bugs, what do they do? They fix it, they upgrade. Unless it catches fire and then they just, then they pull it off the market. But you don’t go back to using a rotary phone! You don’t say, well we’re repealing smartphones — we’re just gonna do the dial-up thing

Whilst Samsung wasn’t specifically mentioned, it’s pretty clear that the Galaxy Note 7 was the target for Obama’s thinly-veiled snipe. We’re sure Samsung would rather we all just forgot the Galaxy Note 7 ever existed at this point, but when even the President of the United States isn’t beyond poking fun, that’s not likely to happen any time soon.

For those of you unaware, Samsung has already discontinued the Galaxy Note 7 following the second and last worldwide recall of the phablet. Such have been the turn of events that the Korean electronics giant is said to be mulling the termination of the Note lineup altogether and instead devoting resources to the development of the Galaxy S lineup of smartphones. As for Obama’s jab at the company, check out part of the speech in the video embedded below.