It’s a well-known fact that no fewer than 99 percent of the Web’s video content consists of pets doing crazy things, and an interesting new compilation sees some of our favorite animals showcase their skills on the Apple iPad.

Let’s face it, animals are inherently funny, and when they’re caught on video performing human-like actions, clips tend to go viral. This particular video, compiled by the folks of CompilarizTVi, sees dogs, cats and even monkeys show us precisely how the coveted Apple tablet is changing their lives. 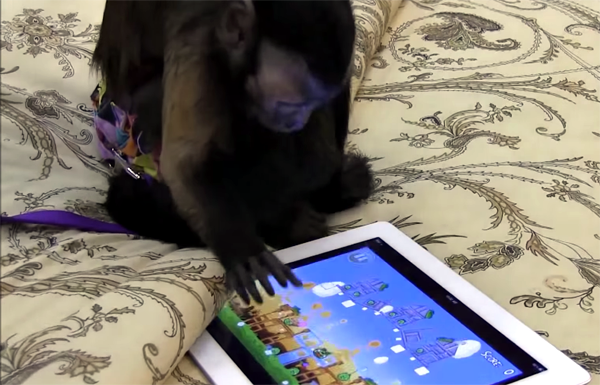 Starting off with the famed scene of a kitten absolutely killing it on Fruit Ninja – something we featured back in the latter stages of 2011 – the video sees a string of cute creatures run us through some of their favorite apps.

Amazing Ant Smasher, which, as the name implies, tasks the player with the role of squishing as many of the creepy crawlies as possible, certainly proved a hit among our amphibian friends, with frogs and geckos having seemingly mastered the art of this potentially tedious plot.

The Apple iPad has been a huge success story since its launch in 2010, with Apple having shifted hundreds of millions of units over the past four years. As well as being widely considered a consumption device for gaming and general entertainment – something these animals know all-too well – the slate has also changed the way we take notes, read and edit documents, and generally manage our daily digital errands.

Late last year, the Cupertino company introduced the iPad Air, which, as well as being the thinnest full-size model to date, inarguably offers the best form factor. Hopefully, this won’t put pet owners off unleashing their cuddly (and not-so-cuddly) friends on their devices and producing more hilarity as shown in the clip below.

Personally, I wouldn’t let my dog – or any animal, for that matter – near my iPad, but I am the kind of person to make a big deal out of a minor scratch. Still, unless you give them a chance, you’re never going to find out whether your self-righteous feline is actually a secret Fruit Ninja don.

Anyway, check out the clip below, and be sure to leave your thoughts via the usual channels!

Thanks, Jonathan for the hat tip!