Microsoft is finally getting ready to end official support for the much maligned Windows Vista on April 11th, meaning even the company that made it will be washing its hands of an operating system that, to this day, is universally disliked.

In reality, everything important has likely already been moved off of Windows Vista, but the software’s official demise is still a date to remember, and in order to celebrate April 11th, we thought you may enjoy a video in which Vista itself is shown running on something much more fun – an iPhone 7. 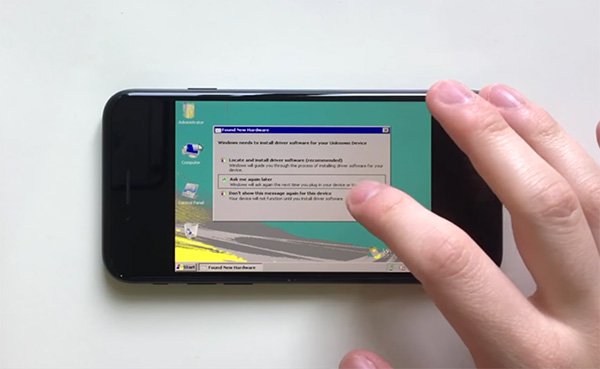 The video, which was posted to YouTube by Hacking Jules, otherwise known as Jules Gerard, is a long one that clocks in at over twelve minutes from beginning to end and even features parts that have been sped up in the interest of brevity.

That’s because, according to the video itself, booting Windows Vista on an iPhone takes upwards of 15 minutes. Sitting down with a coffee and ten minutes to kill is advisable though, because even if you never had the misfortune of using Vista on a computer, it is still somewhat mesmerizing to see it running on an iPhone.

So how is this even possible? Jules points to a GitHub entry for iBox 2 and that is the emulator that can be seen in the video. There are clearly optimization issues at play given the time it takes both for Vista to launch and for simple tasks to be carried out once it is fully operational, but the fact it works at all is a sight to behold.

Now we just hope to never have to see Vista running on anything again, even if it is something as excellent as an iPhone 7. You can watch the YouTube video below.

This isn’t the first time an iPhone has been rigged to run some version of Windows, with a recent video showing us an iPhone 7 running the classic Windows XP.