Apple TV has sat almost dormant for a couple of years now, with barely any software updates and no new hardware since the launch of the iPad 3. But in recent times, the talk of a major connected TV effort has quietened down, with feasibility issues seemingly shelving that idea, and instead, there’s renewed impetus on the small, almost forgotten set-top. Today, the Cupertino has updated Apple TV once again, bringing new Watch ABC, Bloomberg, Crackle and KORTV channels. Further details can be seen after the break.

With Tim Cook having once famously described Apple TV as a mere hobby, the little black box has been about as conspicuous as its form factor, but in the past few months, we’ve seen a full-on effort by the fruit company to bring Apple TV in line with some of the other set top boxes available on the market. It was just back in November when Yahoo Screen and PBS made its appearance, and today’s update takes the number of channels – or apps – further a mile.

At one stage, the idea of a connected Apple TV seemed plausible, with many an analyst touting a release this year and that year, to no apparent avail. Nowadays, it looks as though such a device will never manifest, and with Tim Cook’s men so preoccupied by the other, highly-successful products on its roster – as well as the suspected upcoming iWatch – there wouldn’t appear to be much time for such an enterprise to receive the necessary attention.

Instead, Apple is looking to these regular updates as a way of broadening interest and improving uptake of Apple TV, and the latest is fairly impressive, to say the least.

The new Bloomberg channel streams live, around the clock business news to those rocking an Apple TV, and is apparently the first such app to do so. Further updates in the next few weeks will see a playlist feature hit the Bloomberg channel, and if you’re familiar with the iOS Bloomberg apps, it will function similarly to, and integrate seamlessly with, that. 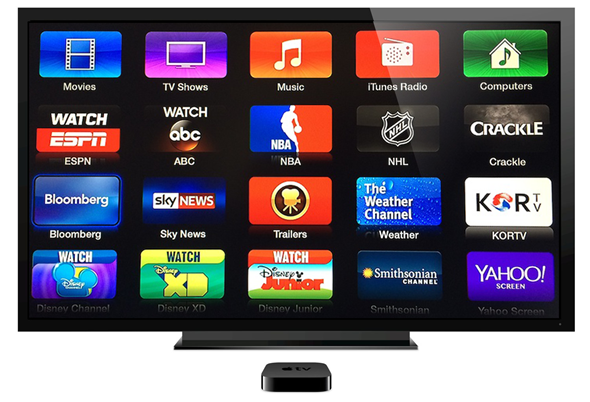 If the updates continue in the same vein, we could see Apple TV emerge as a serious contender, after spending such a long time in obscurity. Of course, with the likes of Chromecast, Now TV and others offering similar services at a much cheaper price, it’s still very much a luxury product, but with smooth AirPlay integration with iOS and OS X devices, it could appeal to Apple fans who have yet to bite.