The introduction and rise to prominence of the cloud in recent years has made the rigmarole of file sharing a whole lot less cumbersome. Moreover, mobile devices needn’t be packed to the gills with storage space, for the cloud can hoard stuff we don’t immediately need in a secure unit. This, of course, is a pretty idealistic view, since a lot of folks still like to retain files on a device for convenience or offline viewing, and if you’ve ever wished you could share said files without having to find some kind of Web-based middleman, PhotoFast’s i-FlashDrive has your back.

Compatibility between iOS and Android is getting better, even if partisan users on both sides refuse to acknowledge the existence of the other, and the i-FlashDrive is perhaps the most uniting product we’ve ever seen. It’s a versatile connector that allows you to directly attach two devices of Android, iOS, and even Windows (although it won’t, unfortunately, work with BlackBerry), and from there, shoot files from one side to the other.

As you’ll see from the press image below, it is perfectly acceptable for a Samsung Galaxy S4 to consensually connect as one, and even though some will cringe at the sight, it should be remembered that it is, after all, the twenty-first century.

Annoyingly, the contraption is based upon the old 30-pin plug, so you’ll have to use the supplied adapter in the very likely event that you’re rocking a Lightning iOS device.

There’s also a normal USB plug supplied in the box, allowing you to connect to your computer or notebook and transfer files in a more traditional manner.

The file transfer process is facilitated by a supplementary app for iOS and Android, and hey, if you’re not completely against the notion of using the cloud from time to time, PhotoFast also throws in Dropbox support. 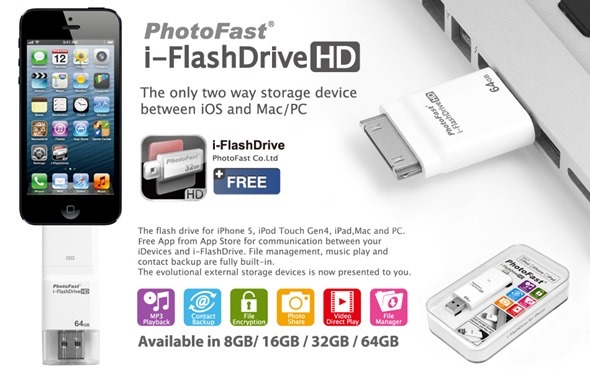 The i-FlashDrive can store files on-board, although the prices for upgrading storage capacity do remind us of another company that charges high premiums for additional doses of flash. The starting price is $170 for 16GB, while the 32 and 64GB models will set you back $230 and $330 respectively. Not sky-high, but certainly a costly product for the sake of sharing files.