Anyone with an iPhone or iPad is likely extremely used to connecting the hardware to a computer via USB and interacting with it via iTunes. That could be transferring information to and from the device, or actually using iTunes for a full iOS restore on the connected hardware. It’s common practice on those devices, but not so much where Apple Watch is concerned.

In fact, the average user will have no ability to connect Apple Watch to a machine or to use iTunes, unless you have an Apple employee system or this iBus by MFC. 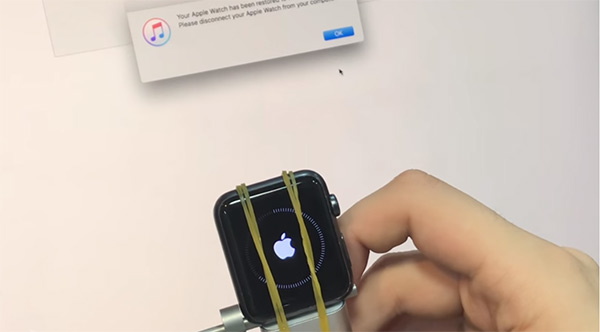 The handy little iBus has been talked about previously. It’s essentially a very similar proposition to the internal software used by Apple employees to connect an Apple Watch to a Mac and be able to interact with it through that machine, including going through the process of restoring it if necessary. Most keen Apple Watch, or Apple fans in general, will have heard about the internal software, or indeed this iBus creation, but very few will have actually seen it in action until this step-by-step walkthrough creation was posted.

The video itself gives an excellent overview of it in action with the Apple Watch. It shows the hardware being placed into DFU mode by holding down the Digital Crown and the button on the side of the Watch for approximately ten seconds. In a similar fashion to iPhone, the side button is then released with the Digital Crown still depressed while the Apple Watch is connected to a Mac via the iBus software and an Apple Lightning cable.

Once again, similar to iPhone and iPad, iTunes will then kick into life and recognize that there is a connected device on the DFU mode.

Users are then able to select a pre-downloaded IPSW file of watchOS to restore directly onto the Apple Watch. It all seems very quick and simple, with most of the theory behind the process borrowed from how it works on iPhone. However, the problem occurs when you remember that Apple doesn’t actually provide the full IPSW files for watchOS to the public, meaning they would have to be found from somewhere else.

It also costs $100 or $120 to actually purchase one of the iBus models, which is quite expensive to simply connect Apple Watch to a Mac. The contraption comes as S1 and S2 version with the S1 version being compatible with the original and Series 1 Apple Watch, while the S2 works with the Series 2 model.