The iPhone 6 and iPhone 6 Plus are packed with an array of different sensors; some of which we take for granted cause hey, you paid over $600 for this beauty. But given the range of sensors they carry, both the devices offer possibilities to developers that maybe, just maybe Apple didn’t realize either. Ivo Leko has just posted a video on YouTube which capitalizes on the iPhone’s magnetometer, accelerometer and microphone to demonstrate how programs can be written to track a magnet’s position straight from your iPhone.

Leko shows us how the sensors can be utilized for tracking the magnet being moved along a grid on a piece of paper, where the iPhone is showing the position of the magnet on a scaled down grid on its screen in real-time. Leko demonstrates that the iPhone can not only track the magnet’s movement in 2D, but 3D as well. 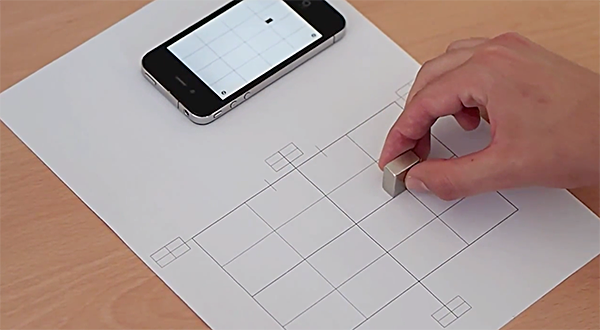 Raising the magnet from the paper can be seen as a change of color for the cursor on the iPhone, which is depicting the location. Once raised, the color changes from solid black to grey and even lighter depending on how far up the magnet is from the surface.

Pressing down hard on the magnet gives off a red color for the cursor, and according to Leko, the integration of the microphone and accelerometer (to detect vibrations) helps make the entire process more accurate.

Lastly, Leko shows off a very useful app for the iPhone’s sensors; a “magnetic stylus for handwriting and painting.” He shows us how easy it is to write or draw on an iPhone using a strong magnet for now, in his prototype’s presentation. Leko points out the immense possibilities this opens up for developers and Apple likewise, in the form of virtual keyboards that use gloves housed with magnets, game controllers, gesture detectors etc.

Earlier, we found out that the A8 processor in the iPhone 6 and 6 Plus is capable of playing 4K video, which was a shocker to most people given how Apple never advertised this key development. However, while that was more of an inherited feature, Leko’s display of his concept to harness the capabilities of the iPhone’s sensors should give more developers a shot at putting this to use on other smartphones out there as well.

For now we wait and watch, but Kudos to Ivo Leko for this amazing effort!