Despite having a redesigned antenna, it seems like iPhone 4’s “antennagate” isn’t over it. After taking it through their regular test, iLounge has discovered that the CDMA based iPhone 4 on Verizon suffers from the same antenna issues that plagued the original GSM iPhone 4, which was launched back in June last year. 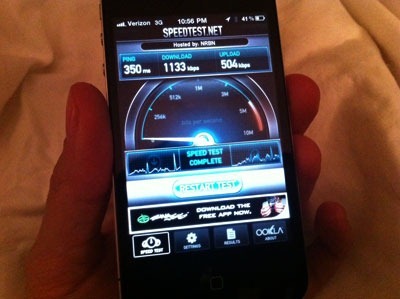 the CDMA iPhone 4 can still lose substantial cellular signal strength when held in the prior “death grip” position, as well as Wi-Fi signal when held in a different position, in each case noticeably slowing or completely stalling the reception of data.

The so called “death grip” or “death hug” in CDMA iPhone 4 case affects both cellular and WiFi signals:

The problem with Wi-Fi reception appears when the device is held snugly in landscape orientation with two hands, a position common when playing games or using the widescreen keyboard. Prior to the Verizon iPhone 4’s launch, sources told iLounge to be on the lookout for the issue, which was being referred to as the “death hug.” It should be noted that although early Apple-sanctioned reviews of the Verizon iPhone 4 claimed that the antenna problems had been fixed in the CDMA model, the same reviewers failed to notice the antenna problems in their original coverage of the GSM model.