It is basically a modern miracle that anyone is able to keep abreast of what’s going on in the modern world of jailbreaking. Once upon a time, the landscape was fairly straightforward with familiar faces continually pushing out easy-to-use tools to liberate iOS devices. Now, we have a continually changing landscape, made, even more, confusing with new faces and names continually dipping in and out to add confusion.

To add to that confusion, there’s now conversations in the community about the upcoming release of a kernel exploit to which Italian developer Luca Todesco has once again taken to Twitter to discuss and offer advice.

The latest series of tweets basically offers a lot more information about the current jailbreak landscape in light of a kernel exploit for iOS 10.3.1 which will soon be released. It’s also the developer’s opportunity to chime in on the situation and provide some worthwhile expert advice in order to attempt and clarify on a situation which is getting extremely murky and confusing.

The tweets are filled with info about KPP bypasses, varying versions of iOS, and advice to those on those particular versions. It’s essentially the confusing world of modern jailbreaking broken up into a series of five tweets.

The upshot of it all is that users who have found themselves running on iOS 10.2.1 should most definitely stay there and not upgrade any further up the ladder. It would seem that Todesco’s existing KPP bypass is functional on iOS 10.2.1, meaning that it’s currently a good place to be. That’s for non-iPhone 7 owners, however. Those iPhone 7 owners who are on iOS 10.1.1 should also stay there as the aforementioned kernel exploit could be used to replace the ones used in mach_portal+yalu jailbreak to provide a better, more stable jailbreak for iPhone 7 owners on that particular firmware. 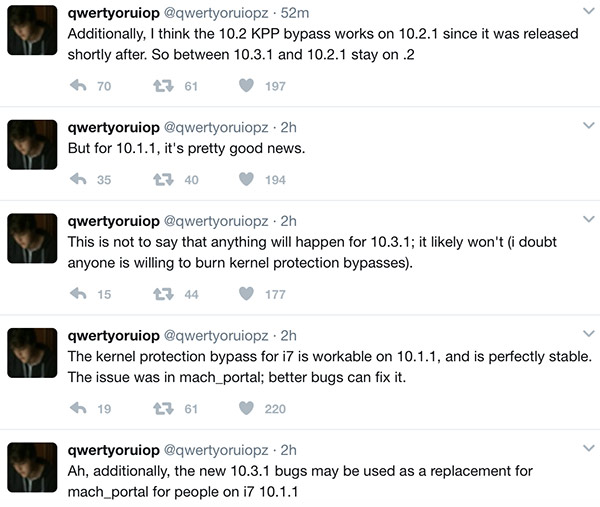 For those that are running iOS 10.3.1, and potentially have one eye on iOS 10.3.2 or the 10.3.3 beta, the advice to most definitely stay clear of updating as the teased Pangu jailbreak might still be coming.