One of the key reasons of doing anything in life is the sense of achievement that it brings, from education to work and pretty much anything else you do. Sure, money, fulfillment and career count, but the fact remains that if you feel you’ve accomplished something, you’re more likely to be happy than with anything else. Studies have shown that even in workplace, those employees are usually happier who get recognition of their work in addition to compensation, as opposed to those who continue to perform their duties without their superiors acknowledging their efforts. As Homosapiens, we are programmed genetically to pursue this sense of achievement, and this fact adheres to basic human psychology.

In the digital era of today, achievements are no longer limited to real life. Our virtual selves also promote if we’ve accomplished something. Take a look at Facebook, the largest social networking platform out there. If you observe any of the most popular games, one thing that you’re bound to notice is that almost all of them come with achievements that can be unlocked and bragged about. If something is this popular, why not incorporate it into something else that we use daily? That seems to be the exact thought behind developer “slackydroid”’s Phonechievements Android app. 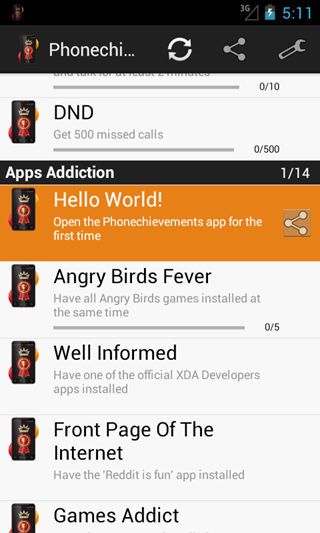 Based off a simple concept, Phonechievements allows you to unlock certain achievements related to the usage of your Android smartphone or tablet. The app monitors the usage of your device, and based on certain predefined criteria, unlocks achievements like having the official XDA-Developers’ app installed, receiving calls, charging your phone, installing games, having superior battery life and loads others. 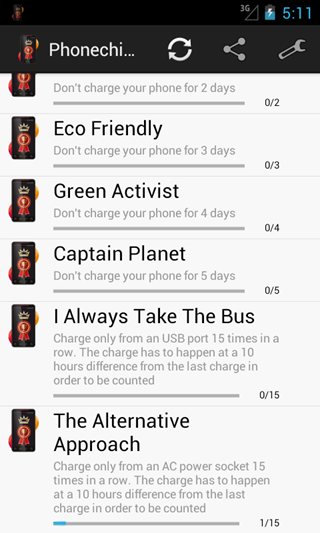 The app comes with a variety of achievements that can be unlocked, some of which are fairly simple (receive 50 phone calls, for example), while others are downright impossible (go on without charging your device for 5 days – try doing that with a device that you regularly use!). This adds even more challenge, in that while you can get some of them with regular usage, others will require you to put your device through certain usage disadvantages to be able to brag about. Speaking of bragging, you can share your unlocked achievements over Facebook and Twitter, so that your friends may also stay abreast of how you master your Android device. 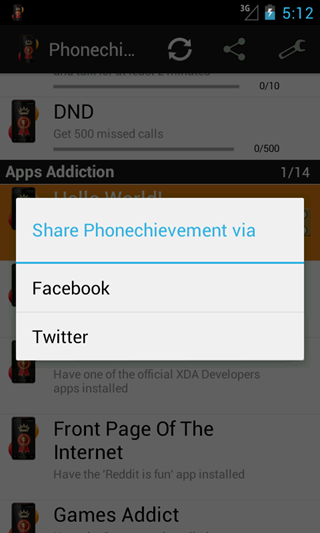 Phonechievements is one app which doesn’t have any practical usage (unless you want to take another friend head on with who does what first), but is still fun to have, and might provide some unprecedented insight into how you run your Android device. The app is compatible with Android 2.0 and above, and is available for free over at the Google Play Store.