In a reply to one of his many followers on Twitter, MuscleNerd of iPhone Dev Team has confirmed that ultrasn0w unlock for iPhone 3GS and iPhone 3G on iOS 4.1 and iOS 4.2, with 05.14.02 baseband will be released in a day or two at most, once iOS 4.2 is released to public. 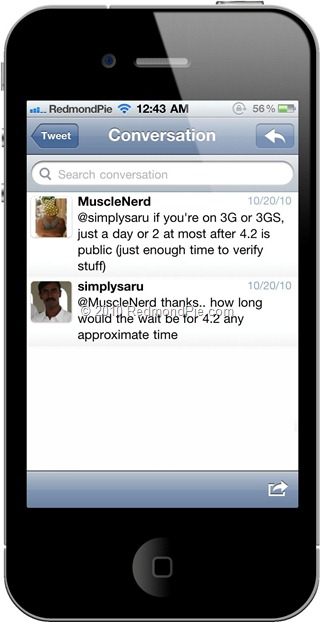 simplysaru: @MuscleNerd thanks.. how long would the wait be for 4.2 any approximate time

MuscleNerd: @simplysaru if you’re on 3G or 3GS, just a day or 2 at most after 4.2 is public (just enough time to verify stuff)

Since the baseband OS on iPhone 4 is different than its predecessors, it will probably take a little more time for the devs to figure out unlock for iPhone 4 on 2.10.04 baseband, on iOS 4.1 and iOS 4.2.

Apple is expected to release iOS 4.2 sometime in November this year.