There are a whopping 72 new emoji winging their way to an iPhone and an iPad near you after the Unicode standards team announced their release this week. Apple is likely to include these new emoji in the upcoming iOS 10 release in September, with those using the developer and public betas between now and then likely to get a sneak peak.

While there are 72 new emoji in the release, most people are unlikely to be particularly interested in most of them, but there are some great ones to be found if you look hard enough. There are new icons and faces included in the new release, with one of my personal favorites being a smiley face with a Pinocchio-esque nose protruding from it. I expect to be using that one quite a lot when my devices can take advantage of them! 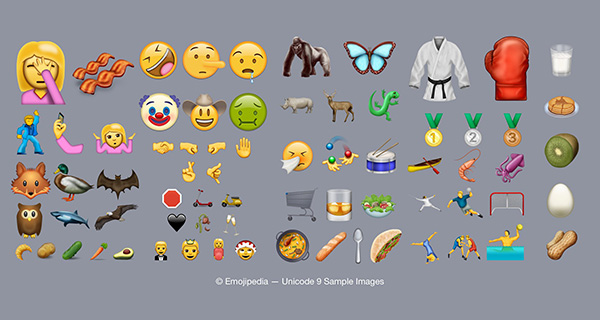 Those of us that like to use hand gestures will be pleased to learn that extra gestures will be included as part of the additional 72 emoji, and new animal and food-based emoji are also in attendance for anyone that found themselves unable to accurately depict their lunch in emoji form, presumably when Instagram isn’t an option. We’re not really sure.

As we told you last week, though, two emoji that will not be present are one of a rifle and another depicting the modern pentathlon. Apple and Microsoft were two companies, amongst others, who put the kibosh on their inclusion as part of Unicode 9.0, so don’t expect either of those to make an appearance when these new emoji appear in iOS later this year. Assuming there isn’t a minor iOS release scheduled that they could be part of, that is.

Emojipedia has put together a video of all 72 new emojis in glorious high resolution as they might appear in Apple’s mobile OS. You can view it below.