If you simply cannot bring yourself to interact with another person through some of the instant messaging apps without sending your favorite emoji, then you may have been excited by the news that Apple’s iOS 10 could potentially introduce 70+ new emoji. That firmware is due to be unveiled in the first instance to developers at WWDC 2016 later this month, but ahead of that announcement, the Unicode Consortium has officially revealed 72 newly created emoji characters that will be available as part of Unicode 9.0 package.

Unicode 9 is ready and set to be officially released on June 21st, meaning that there is still a very real and exciting chance that Apple will adopt these new characters and make them available as part of the keyboard experience within next major iOS update. 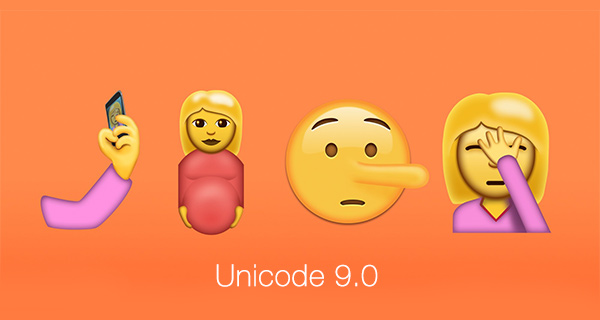 With the latest version of Apple’s platform set to be unveiled and made available to developers starting June 13th – directly after the keynote presentation at the opening of WWDC at the Bill Graham Civic Auditorium – there’s a possibility that the update will have to come as part of a second or third developer seed after Unicode 9 is officially out.

As part of those 72 newly integrated emoji characters, 22 of them fall under the “Smileys and People” categorization. When available, users will be able to make their text conversations a lot richer and more emotive by adding a pregnant woman character, a dancing man emoji, a face palm for those troubling moments, and even a rolling on the floor laughing face for those times when you really don’t want to be that person adding “ROFL” to your messages. After all, it’s most definitely time to move forward and choose emoji over silly abbreviations. Oh and there’s that all important selfie emoji as well.

If you’re the type of person who likes to Instagram every meal that you eat from every restaurant that you visit, then you’ll probably appreciate the updated “Food and Drink” category. There are now an additional 18 approved characters, including the potentially very popular bacon emoji, as well as visual icons for cucumber, eggplant, and croissant. If the day is just getting too much for you and you want to relax with a nice alcoholic beverage to take away the pain, then you can now express yourself in more detail with a nice tumbler glass containing whiskey.

Let’s hope that Apple introduces the new Unicode 9 characters soon rather than later. Till then, check out all 72 new emoji characters in HD in the video embedded below.