Turn Your Windows PC Into An AirPlay Receiver To Stream Songs From iPhone, iPad And iPod touch

The ongoing argument between Windows and OS X users as to which holds the crown is of fierce debate, with devotees from both sides quick to point out the various advantages and disadvantages of each.

Whilst Windows is the most widely-used, Apple’s iteration continues to go from strength to strength, and does have many quirks attributing to its increased popularity. AirPlay is one such feature, allowing music to be played wirelessly to compatible speakers. Thanks to a nifty little app by the name of Shairport4w though, Windows users can too stream music from their iPhone, iPad and iPad touch over a Wi-Fi connection.

A simple, small and free app, Shairport4w turns your Windows PC into an AirPlay receiver with a simple setup process that takes less than a minute. It requires Apple’s Bonjour service to be running, but as an iDevice user, you’ll probably already have iTunes installed. As iTunes relies on Bonjour, you needn’t download it separately, but if you don’t have iTunes, Shairport4w will prompt you to download the Bonjour package at first launch.

So, let’s go through the setup process.

Step 2: As it’s a portable utility, there’s no need to install anything. Simply extract from the .zip to the desired location and run.

Step 3: Specify a name and if you wish, password for Airport and click the ‘Set’ button. After that, you can minimize and leave it to run in the background, opening again only if you wish to change the name or password. 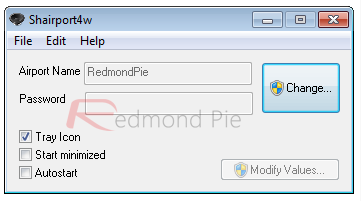 Step 4: Launch iTunes on any computer and your iPhone, iPad or iPod touch connected to the same wireless network. The name you set in Shairport4w will now be visible in the AirPlay menu – select it and you’re good to go! 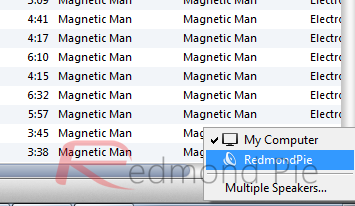 Note: We haven’t tested this app on the latest Windows 8 Developer Preview so we can’t say for sure whether it would work on it or not. If it does however; then drop your comments in our Facebook and Google+ fan pages.

Thanks Daniel for the hat tip!