TinyUmbrella has been updated to version 6.13.00, bringing support for Apple’s latest iOS 6.1.3 firmware. As well as catering to the most recent edition of the popular mobile OS, developer Notcom has also fixed the ClassNotFoundException on Platform bug, which seemed only to affect TinyUmbrella users on Windows.

Downgrading an iOS device can often turn out to be one of the more cumbersome activities in the world of jailbreaking, and those who’ve sought to revert to old firmware on more than one occasion will be very much aware of what I am talking about. In these situations, TinyUmbrella is an invaluable little app to have in the locker.

Notcom took to Twitter to announce the update, and although there’s no support for APTicket validation, he does shed some light on the current state of play:

Cydia creator Saurik took to his blog earlier this month to discuss the downgrade iOS 6.1.3 to 6.1.2 issue, and among other things, noted that any APTickets/SHSH saved via Cydia on iOS 6.0 up until 6.1.2 were essentially useless. Those on A4 devices, provided they had saved their APTickets locally via tools such as TU or iFaith, or some other way aside from Cydia, could still hold out a hope of downgrading to said firmware, but all APTickets saved by Cydia were gone in vain.

TinyUmbrella has long since been an important tool in the jailbreak scene for downgrading, and with the updates still rolling through, is still as pivotal as it always has been. As well as some of the more recent features, one of its key selling points is its ability to kick a device out of recovery mode at will, and having jailbroken and messed around with dozens of iOS devices over the years, I don’t really know where I’d be without it. 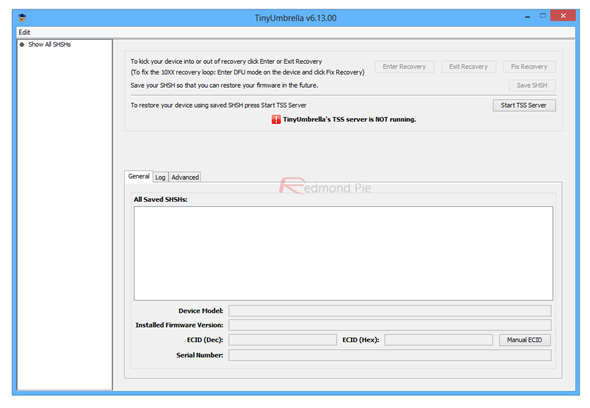 You can grab the new TinyUmbrella (6.13.00) from the links given below, and we will also keep our eyes peeled for version 6.13.01 bringing that aforementioned APTicket support.

Even though saving 6.1.3 blobs aren’t as useful now, but there is no harm in saving them. You never know when they may become useful again. Almost all iOS devices are supported by TinyUmbrella, including the likes of iPhone 5, iPad mini and iPod touch 5.

If you do happen to sink your teeth into this new version, please do let us know how it runs for you by leaving a comment via the usual mediums below!