TinyUmbrella has been updated to support iOS 6.1.4 for iPhone 5. TinyUmbrella is a popular tool in the jailbreak community which is widely used to save SHSH blobs and APTickets for iOS firmwares Apple is still signing. Aside from supporting the very latest firmware, there’s very little else to report from the latest version 6.14.00, and for interested parties, we’ve got the direct links right after the break.

This new release follows closely behind last week’s TinyUmbrella 6.13.00 update, which saw the ClassNotFoundException on Platform bug fixed for Windows users while also bringing support for iOS 6.1.3. Now, creator Notcom has come through with another minor bump to bring the popular software tool up to speed with the most recent iOS release, and as per the release notes:

TinyUmbrella was updated for the stealth iOS 6.1.4 release for iPhone5,1 and iPhone5,2.

As you may or may not know, both iPhone5,1 and iPhone5,2 resemble what we see as the iPhone 5. While iPhone5,1 represents the GSM model of the flagship Apple smartphone, iPhone5,2 is indeed the CDMA version, used on the networks of popular carriers Sprint and Verizon Wireless.

In that previous version of TinyUmbrella released in late April, Notcom noted in the change log that he would’ve added APTicket validation, but didn’t have time to get it into the release. Seeing as there’s no mention of it again, it’s perhaps another feature TinyUmbrella has been left waiting on, but considering the release of iOS 6.1.4 was very much an impromptu one by Apple, we’ll let him off!

Within the jailbreak scene, TinyUmbrella has been an essential tool throughout the years in helping users revert back to previous versions of iOS. Even if you have never attempted to perform a downgrade of this kind, it’s a useful app to have in the locker thanks to some of its accompanying features, such as the ability to kick a device out of the DFU mode loop. 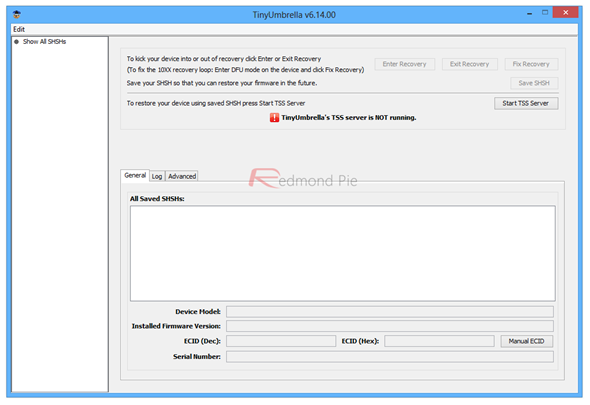 While saving SHSH blobs for iOS 6.1.4 may not be so useful right now, there is no harm in doing so, and it only takes a few minutes to save them. You never know when they might come in handy. It’s always better to be safe than sorry.

So, if you want to dive in with the new version which, by the way, is 6.14.00, then please do check out the direct links provided below for both Windows and Apple’s OS X, along with a link to our coverage on the release of iOS 6.1.4.