CyanogenMod is one of the most popular aftermarket Android firmware, and despite some early suggestions that the all-new Galaxy S4 would throw up issues when it came to compatibility with CM, it now seems as though those reservations were a tad overstated. Steve Kondik, the lead developer behind the entire Cyanogen project, has taken to G+ showcase the very first Galaxy S4 builds, which are now available for the T-Mobile and Canadian variants of the flagship handset. More details can be found right after the jump.

Given how quickly the CM team moves in developing new builds, we’d expect the T-Mobile and Canadian S4 support to be swiftly followed by compatibility with the many other flavors of this year’s Samsung humdinger. In fact, as Kondik notes, the International i9500 is next in line, but since the team has yet to get hold of this specific variant to bring official support, its development has taken a back seat while the time and resources of the CM team are focused upon these initial two.

So, if you’ve been looking forward to sinking your teeth into the very latest CyangogenMod 10.1 builds for the Galaxy S 4 on T-Mobile SGH-M919 or the Canadian SGH-i337M model, they are now prepared and ready for consumption over at the CyanogenMod site.

For those of you unfamiliar with the term “nightly,” perhaps a little background info is in order. The nightly builds are released every 24 hours, and as such, can often be a little rough around the edges. These “bleeding-edge” builds are aimed primarily at developers that wish to help the process of bringing CM 10.1 up to scratch, and if you’re not familiar with the developmental side of CM, you may be better of skipping these nightlies until early stability issues have been seen to. 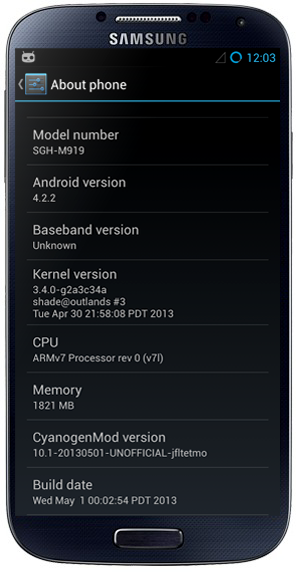 As well as the nightly build, you may also encounter “experimental” releases, which are released in-between nightlies. Again, the same set of rules generally apply, so if you’re more of a CyanogenMod consumer than developer, proceed with the utmost caution.

As Kondik himself notes, there are “a few rough edges,” but once these teething issues have been addressed, it should be safe for the less experienced among you to dive right in. Also, we will do full-fledge guides on how to flash it on your Galaxy S4, so stay tuned for that!

You can download the CyanogenMod 10.1 nightlies for your Galaxy S4 from here (T-Mobile) and here (Canadian variants).