Apple’s Tim Cook has doubled-down on comments that he made during an American Workforce Policy Advisory Board meeting at the White House earlier in the year pertaining to his belief that developers don’t need to progress through a long-term degree course to be efficient programmers.

Apple’s CEO has been in the Florida area visiting an Apple Store in Orlando and attending a conference with one of Apple’s major partners in the enterprise space, SAP.

During that visit to the Orlando Apple Store, Cook spoke with Liam Rosenfeld, one of the many scholarship winners who will be attending the company’s WWDC event in California next month. Cook not only gushed to TechCrunch over what Rosenfeld has achieved but also talked about the importance of learning coding skills as early as possible:

I don’t think a four-year degree is necessary to be proficient at coding. I think that’s an old, traditional view. What we found out is that if we can get coding in in the early grades and have a progression of difficulty over the tenure of somebody’s high school years, by the time you graduate kids like Liam, as an example of this, they’re already writing apps that could be put on the App Store.

As part of the trip, Cook also attended a pre-arranged conference with an announcement that Apple and SAP would solidify their ongoing partnership in order to try and build a new wave of apps and products that could penetrate enterprise with new technologies. 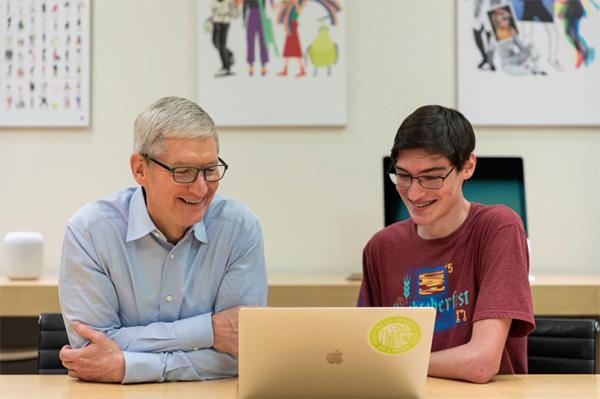 Cook believes that businesses have a reluctance to change and are not using or embracing new technologies effectively and hopes that the Apple and SAP partnership could change that:

Apple’s Worldwide Developer Conference is just a few weeks away now and will include 350 individuals who managed to secure an Apple scholarship. We will get the first glimpse of iOS 13 during the week-long conference but it also represents an opportunity for developers to hold session with Apple’s engineers.