Tim Cook is once again giving two lucky people the chance to have lunch with him and his team at Apple’s headquarters in Cupertino. The chance is being put up as a charity auction through Charitybuzz, and would be the third time Cook has pulled this off, but this year Apple’s CEO is sweetening the deal with two VIP passes to an Apple keynote event as well.

Cook announced this opportunity through a tweet which read, “Join me for lunch (and a keynote!) and help a great cause. @RFKHumanRights is working toward a more just world.” The lunch is expected to last around one hour, and while the auction does include the free lunch and all, the winner of this bid will be required to cover all travel and lodging expenses.

The auction is set to end on the 6th of May, but the date of the lunch is uncertain for now, and will be decided mutually after the 6th. As for the keynote event, the first one coming up after the auction is WWDC 2015, due on the 8th of June, where Apple is expected to reveal iOS 9, a new version of OS X, and a possibly revamped Apple TV 4, along with a new music and TV streaming services.

With bids currently reaching $80,000 – at the time of writing – the lunch including the two VIP passes for the keynote event are estimated at a value of $100,000. This may seem like some pretty crazy stuff, but last year’s lunch meeting was sold for $330,001, while the 2013 coffee meeting is truly the pick of these charity auctions; selling for a whopping $610,000. 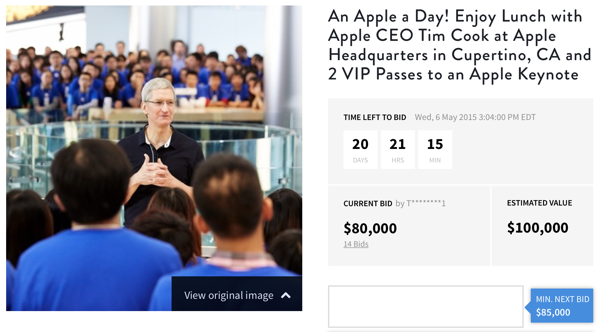 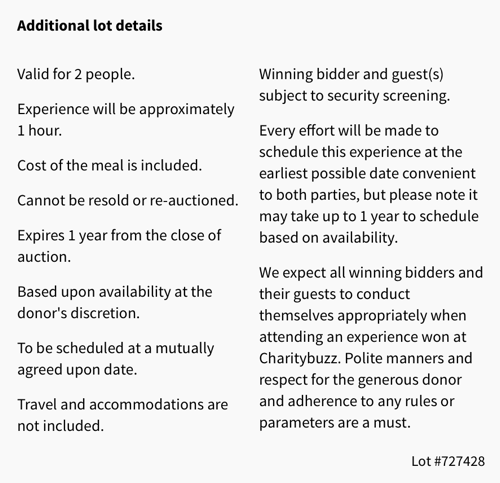 The beneficiary of this charity will of course be the RFK Center for Justice and Human Rights, as Cook announced in his tweet. The organization’s main goal is to advocate the advancement of social justice and corporate responsibility through the advocacy of human rights. Meanwhile Cook himself has announced in a recent interview that he will be looking to donate his fortune to charitable causes, and auctioning of coffee and lunch meetings seem to be signs of things to come as the Apple CEO also hinted at pursuing philanthropic ventures as well while remaining largely silent on the details.

Do share your thoughts on this news in the comments section below.