The Glide messaging app has just been handed a substantial update, which, among a host of tweaks and enhancements, offers video messaging support for the Apple Watch. Full details can be found after the leap.

The Apple Watch has been treated to mostly positive reviews so far, thanks to its build quality, stylish nature and innovative software, but its far from perfect. One feature that many are hoping will appear in future versions is a camera, and although it would be difficult for one to take photos using a wrist-worn gadget such as the Apple Watch, it seems inevitable that Apple and other camera-less smartwatch vendors will soon be adding a shooter. 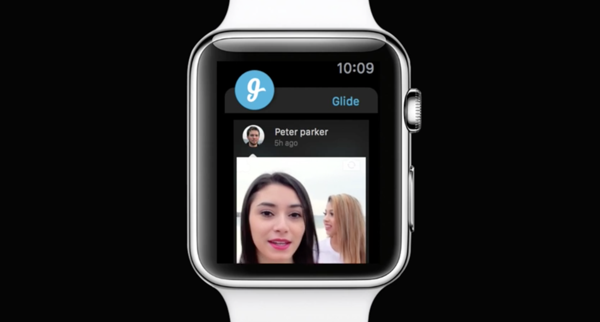 Just because it doesn’t have a camera of its own, though, this doesn’t mean to say that it cannot be used for photo-related tasks. We already know, for example, that Instagram has a native Apple Watch utility, being the most well-known of a large party of such apps, and today, the Glide messaging app has been updated to support video messaging through Apple Watch.

Naturally, you won’t be able to capture video messages on Apple Watch, but you will be able to view those received on your iPhone, without having to extract your handset from your pocket. The idea that Watch will fill in for many of the day-to-day digital errands is one that the Glide team has certainly acknowledged, and you’ll even be able to shoot off a response to your messages directly through Apple Watch.

Glide, for the uninitiated, is a neat IM experience that allows you to partake in traditional text, video and group chat, and combines many of the great features you might find in Skype, WhatsApp, LINE and many other rivaling platforms.

It’s completely free of charge, so if you would like to give it a whirl, hit that download link below, and as always, drop us a comment via the usual mediums.

Check out the video sneak peek below of the Glide app in action on Apple Watch: