The first alleged mistress of Tiger Woods Rachel Uchitel was scheduled to hold a press conference at 2.30 pm EST today where she and her lawyer, Gloria Allred were expected to brief the media about her affair with Woods. But now to according to E! Online, Rachel abruptly cancelled the conference due to “unforeseen circumstances.”. Rachel Uchitel can be seen in the photograph attached below. 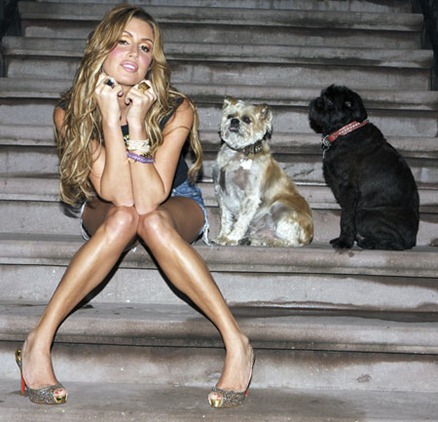 For those of you who missed out on our coverage of Tiger Woods scandal: the news of Tiger Woods car accident just outside his home last week, spread like a wild fire. Later the whole story took a controversial turn when Tiger’s alleged affair with Rachel Uchitel was revealed to public. Soon after, a new scandal broke out with another mistress named Jaimee Grubbs, a cocktail waitress, stating that she and Tiger Woods also had an affair which lasted for 31 months or so and they have been indulged in sexual relations as well. The discovery of Woods’ Voicemail recording to Jaimee further strengthened her claim regarding the alleged affair in question.

And now there are rumors that Tiger and his wife Elin Nordergren are heading for separation. Some sources report that Elin Nordergren has just transferred a seven figure amount to her account from Woods’ in anticipation of what and where they are heading for. According to calculations, Elin Nordergren would be eligible for $20 million if they go for a split after ten long years of happy marriage. If that happens, it really will be a sad moment for all.