The Apple iPhone 6 has been unboxed at least ten million times since launching some eight days ago, and although some folks have a ritualistic system for how they unravel their gadgets, few will have played out like this one.

Blue Man Group is famed for creating unusual theatrical shows and concerts, mixing tech, comedy and other elements to create unique experiences. Having gotten hold of an iPhone 6, the company wasn’t about to grab a box cutter and empty its contents like most folk, and the three ‘Blue Men’ in the clip, made to seem as if they’d been drafted in from another planet, found the whole task to be rather tricky. 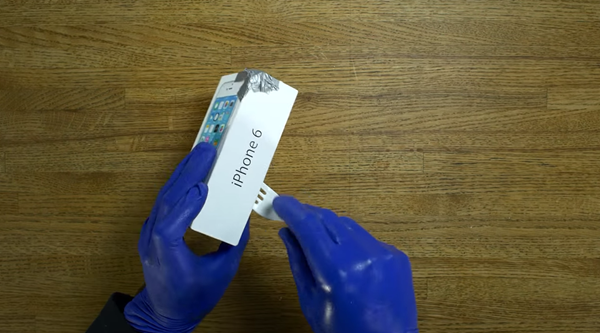 The video is both entertaining and frustrating at the same time as the humanoid characters utilize a series of tools in their efforts to unbox the iPhone 6, with drills, knives, saws and other equipment all consulted in their attempts to discover what all the fuss is about. At many points, you believe the trio has finally discovered how to get inside, only for one of them to rebuff the idea before switching to yet another useless tool.

Aside from the quirky music and array of materials, I guess the particularly unique thing about the clip is that it’s not actually an unboxing. The handset remains inside its heavily damaged packaging, with each hole and scratch patched up with materials such as feathers, tape, and what looks like plasticine or some other putty-like composition.

I have to say, I didn’t personally find the clip to be particularly humorous, but then again, Samsung’s all-new ad to promote the Galaxy Note 4 didn’t have me cackling with laughter either.

Then again, this video does dispel the myth that if you’ve seen one unboxing video of a product, you’ve seen them all, although since it’s not, strictly speaking, an actual unboxing, perhaps it doesn’t.

The video ends with the humanoids completely startled when the device begins making noise, with each member taking a slow step back in what seems to be a mixture of amazement and confusion.

So, if you’re looking for a little light-hearted entertainment this weekend, check out the video which we’ve embedded below, and do share your thoughts in the comments.