This Hilarious iMessage Prank Is Pure Evil, Try It Now!

The little icon that pops up in iMessage to indicate that the other person is writing a reply can be something of a double-edged sword. Most of the time, we sit there and wait for the message to come through, in which cases it proves a useful implementation, but on other occasions, when the other person pauses their response or replies with something innocuous like (my biggest gripe) "LOL," we often curse the fact that iMessage has essentially given a false-positive. Now, if you want to irritate somebody by feigning an elongated response, you can do using the very simple trick of sending a copy of that very same icon.

It’s weird that nobody has thought of such a prank up until now, but that doesn’t detract from the fact that there’s plenty of fun to be had. The guys over at Miscellaneous Mischief dreamed up this little scheme, and developed a site named "Infinite Text-In-Progress" to accompany other like-minded troublemakers.

Their animated .gif works an absolute treat, and all you have to do is save it to your device and subsequently send it off to the friend you wish to prank. From there, they’ll check their messages and see that you’re typing, and depending on their patience levels, will probably sit there and wait a good while for the message that will simply never arrive.

Of course, you will need to be quite sensible with how you use it. For example, if you don’t send any text prior to the image, a fairly accomplished iOS user might think it a little strange that they have an alert and no message. What’s best, perhaps, is that you send a message first, followed by the image, and perhaps they will hold off their response in anticipation of a mammoth follow-up message. 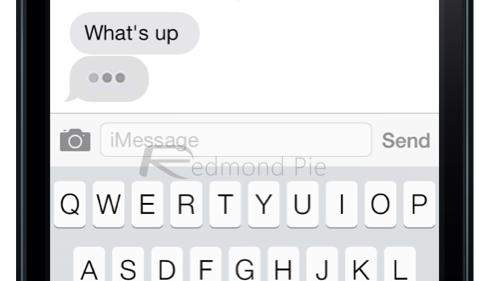 They should realize, after writing a response and seeing the image move up in the conversation, that they’ve been completely fooled, but then again, with many user still familiarizing themselves with the new features and tweaks packed into iOS 7, maybe you can have more fun with this little trick than you might have predicted.

Anyway, try it with some of your buddies by heading over to: miscellaneousmischief.com/textinprogress.html