The recently released Apple Watch has been widely praised over the last few months for its design, with the general consensus being that Apple has created something truly beautiful with its “most personal product yet.” However, PeripateticPandas seems to have a different opinion and has even gone as far as taking a grinder to the device to make some home-brew alterations.

The video starts with a rather nostalgic walk down memory lane by showing Apple’s original vintage watch that was offered by the Cupertino company back in 1995. In case you don’t remember, Apple offered a promotion back in the mid 1990s that allowed consumers to receive a free vintage Apple timepiece as a gift if they upgraded to System 7.5, which was a precursor to what we now know as OS X. A voiceover by the name of “Jonathan” initially waxes lyrical about the “playfulness” of the original Apple Watch, paying particular lip service to the “circular interface” and the “round design.” 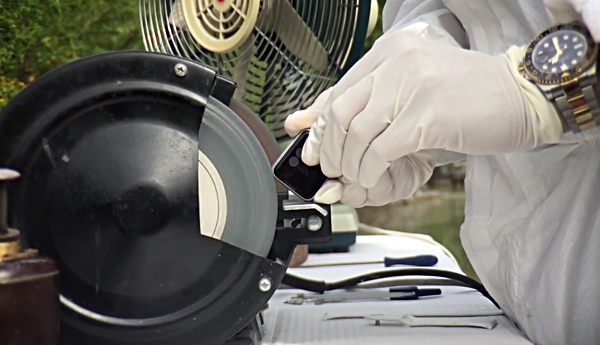 The new Apple Watch is then brought into the video, described as “stepping into the digital age.” It’s there where it all goes wrong. The video then takes a weird turn as a man dressed in a white chemical suit emerges from the river with dramatic classical music playing over the top. An unstrapped modern Apple Watch is then gripped, with each side being taken to the grinder individually in an attempt to emulate the original circular interface of Apple’s initial watch from 1995.

It’s amazing to see that even in the aftermath of taking such a beautiful product to two different grinders that it actually still works flawlessly. This is course testament to the build quality of Apple products. Of course, it doesn’t take a rocket scientist to predict that the original design is a lot more aesthetically appealing that one that has been taken to a grinder at home by what appears to be an unhinged content creator in a white chemical suit. Still, the dramatic soundtrack and production values of the video make it worth a watch.

Check out the video below and let us know what you think about it.