Apple products are renowned for being in sync with each other in a harmonious, seamless fashion. The Cupertino company places much emphasis on getting things done with less and less wires, buttons, and optical drives, and designer Ishac Bertran has created a wonderful concept in keeping with that motif.

File transfer used to be a painstaking exercise. Burning files to a DVD or transferring to bulky, loud portable hard drives via USB 1.1 were accepted as the time-consuming norm. Things are a little different nowadays though, and thanks to vast improvements, most file transfers can be programmed to occur in an automatic, smooth and unattended fashion. 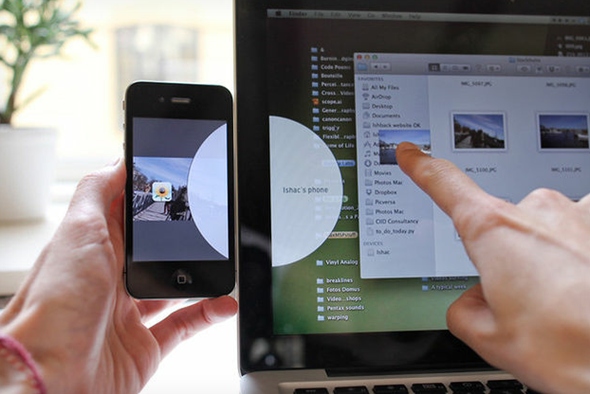 Bertran progresses things delightfully forward, however, with his swipe-based concept. Believing there isn’t, as he describes, a "tangible connection" in a file sync, he has created a concept video, which, as you can see, would allow user transfer files simply by holding an iPhone to the side of a MacBook:

Once each device has detected that the other is within proximity, a semi-circular shape appears on each, allowing various files such as pictures, music, videos or documents to be dragged from one to the other. Bertran envisages a similar implementation as natural progression:

I thought that a representation of a physical connection would facilitate a more intuitive interaction based on traditional mental models from the physical world.

Although it most certainly looks interesting, without any real information regarding how such technology would be implemented, it is simply a pipe-dream. Without, say, a touch-screen Mac, it wouldn’t quite feel as smooth as it perhaps should, and also, unless file transfers were to become significantly quicker, holding an iPhone for a prolonged amount of time would likely arouse some form of repetitive strain injury.

Although it looks a little more James Bond than a viable Apple product, if Bertran (or anybody, for that matter) were to go ahead and try to develop this concept, I’m sure you guys will agree that it would be a great deal of fun to try out.

Like all futuristic ideas for mobile devices, though (see face detection for Android), some things are just better off left as concepts, and this, I’m afraid, is probably one of them.