Did you know that Bluetooth is the Anglicized version of the name given to Kind Harald I of Denmark who was well-known for uniting various tribes in Denmark into one single Kingdom? Not exactly relevant to the iBluetooth Call app, but still it’s worth knowing that our technology names are steeped in history.

So, the iBluetooth Call jailbreak app that is currently running at version 1.3 is something which I would describe as a “novelty” which allows users to connect to other jailbroken devices through Bluetooth for the purpose of initiating local voice chats that are passed between the wireless technology. By calling this app a novelty, I don’t want to deter from the fact that it is actually a fairly decent idea and a very good implementation, it is just that it doesn’t really provide any real-life benefits due to the limitations of Bluetooth.

To make effective use of this app, a number of people in a group need to install it upon their jailbroken device and invoke a chat session by connecting their devices through the supplied app. Anyone who intends to use iBluetooth Call will obviously need to have a device with Bluetooth capabilities as well as a built-in microphone. Considering the app is compatible with iOS 3.0 and above, hence there is a possibility that users of the old second-gen iPod touch could install this tweak and join the Bluetooth voice convo party. In other words, a device running iOS 3.0 and above, tagged along with a built-in microphone (or a wired headset with a microphone) is all what it needs to kick off this app. 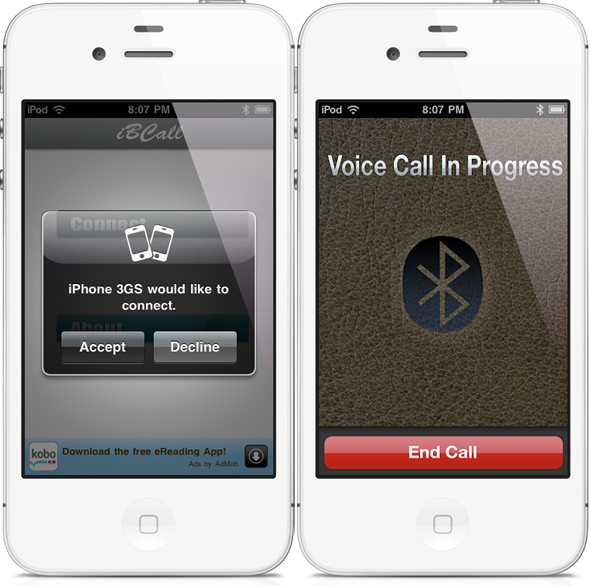 The idea of being able to talk in a small group through Bluetooth is quite an attractive one, and as the developer points out, it could be a nice little thing to use in a small party or with friends. However, in real-world situations, the connectivity limitations of the Bluetooth technology make this a tweak of form and novelty over mass function.

iBluetooth Call is available as a free of charge download from the BigBoss repository and is compatible with Bluetooth enabled devices which are running iOS 3.0 and above, and have a built-in microphone or an attached compatible headset.