While the announcement for the next Galaxy smartphone – informally referred to as the Galaxy S III – isn’t due until May 3rd as we’ve previously reported, Samsung has already dropped some news regarding the processor that will power the upcoming flagship Android smartphone. By the looks of things, this processor definitely seems to be worth getting your Android-mascot branded mascot in a twist over. It’s called the Exynos 4 Quad, is clocked at 1.4GHz, and is based on the ARM Cortex A9 mobile processor. This processor seems to be quite inline with some earlier rumors, apart from the branding; rumors suggested that the upcoming quad-core CPU will sport the Exynos 5 branding. 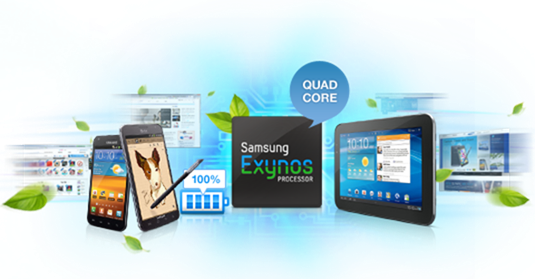 Nevertheless, Samsung touts that this is the first processor built on High-k Metal Gate low-power process technology, and performs exceptionally well when it comes to multitasking, and resource-intensive tasks such as 3D gaming and even video editing.

The Exynos 4 Quad sports a full HD 30 FPS video codec engine for quality 1080p video recording and playback, an embedded image signal processor interface for quality camera functionality, and an HDMI 1.4 interface. Also, the processor is identical in form factor measurements and socket to the Exynos 4 Dual, allowing the processor to be easily implemented without much additional effort or cost. The processor is already well into production and is on track to being housed in the much-anticipated Galaxy S III. 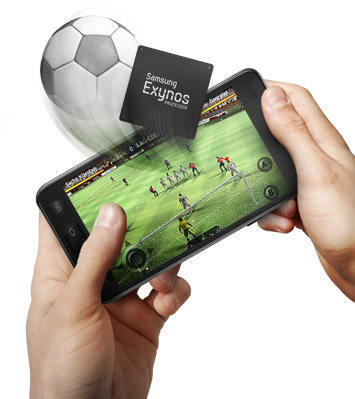 Speaking of the Galaxy S III, let’s quickly recap some other facets of the phone that are rumored: 4G connectivity (of course), a 4.8" full HD 1080p display, and of course, the latest version of Android: Ice Cream Sandwich 4.0.3, with the Samsung TouchWiz user interface. Word on the street is that 10 million Galaxy S devices have already been pre-ordered by channel partners seeking to sell the device. While the hype surrounding the Galaxy S III doesn’t topple the iPhone, which retains the throne when it comes to marketing hype, it certainly comes close.

Samsung have also released a video demonstrating the performance of the new CPU, as you can see below.