The New iPad Is Magical, When Given To Two Magicians [VIDEO]

We love a good magic show here at Redmond Pie, and if anyone can somehow manage to incorporate some technology into a magic act then we’re particularly interested. Magic and technology, a match made in heaven. We have been treated to just that a few times since the iPad arrived, but this might just be the best we’ve encountered yet.

The iPad has been called a lot of names since its initial release back in 2010. Much fun has been poked at Apple for its incessant use of superlatives when describing its devices, and the iPad has been the biggest beneficiary of such exaggeration. 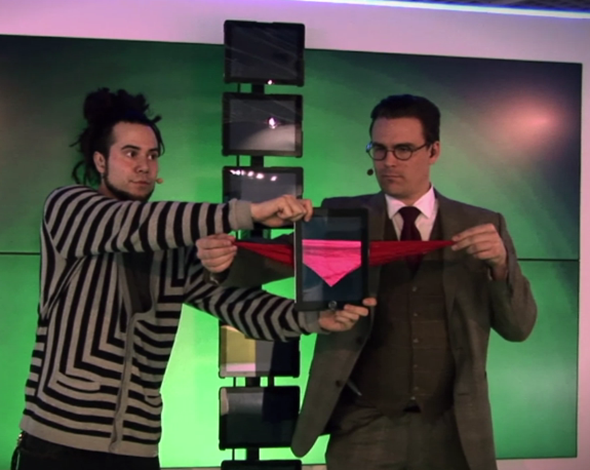 Those who have been paying attention over the last few years will no doubt remember Apple calling the iPad ‘magical and revolutionary.’ Few would argue against the iPad being revolutionary, but is magical not perhaps getting a little carried away?

As this video shows, Apple may actually have been on to something!

We have seen magicians use the iPad as a prop a few times before, and some of the same tricks have found their way into this performance too, but we have to admit that this is possibly the most impressive video we have seen to date, and we’re sure you will agree.

The performance by Step2 Communication at MIPIM in Cannes included no less than seven different iPads to pull off, and spans over three minutes of impressive Apple-powered magic.

We can only speculate about how much practice and preparation this presentation took in order to get spot on, but all we can do is hold our hands up and offer a hearty "well done" to those involved. Color us impressed.

We really have to admit; these magicians (or tricksters) pulled off an amazing feat with all those iPads in the background. I can’t emphasize more on the fact that we’re all dearly impressed.

On a semi-related note, has anyone ever wondered why nobody ever seems to use an Android tablet for these performances? Or perhaps a nice BlackBerry PlayBook?

Someone buying a BlackBerry PlayBook… Now that really would be magical.