Temple Run 2 Is The Fastest-Downloaded Mobile Game Ever, With 50 Million Downloads In Two Weeks

Temple Run, like the vast majority of mobile success stories of the past five or six years, is an incredibly simple, yet challenging and addictive title which sees an Indiana Jones-type run through a temple, evading various obstacles in order to achieve the highest score possible. Not only has it ranked highly in terms of playability and popularity, but is is also free of charge, and with the sequel – Temple Run 2 – getting 2013 off to a great start on the mobile gaming front, it was always going to be an instant hit. However, the second installment has exceeded all expectation, having been downloaded an incredible 50 million times in two weeks, and on the way to becoming the fastest-selling mobile game in history.

Having played the game myself on an iPhone, it maintains that original flavor and addictiveness, while also offering a more polished, slick user experience. The hugely positive response is well-deserved, and although Temple Run: Brave may not have been as popular as the original and its ‘proper’ sequel, it looks as though.

Temple Run 2 launched as an App Store-only title on January 17th, and its sprint to the number one spot following six million downloads in the first 24 hours was quickly matched by the release for Android. The original Temple Run has been downloaded a total of 170 million times, and it looks as though Imangi’s latest hit could eclipse even that almighty figure.

Making it into the Apple Store is usually a sure sign that a particular game or app has hit the big time. Walk into any glass-clad Cupertino Retail outlet, pick up any iPhone, iPad or iPod touch, and you’ll always find a copy of Temple Run looking to steal a few minutes of your time. 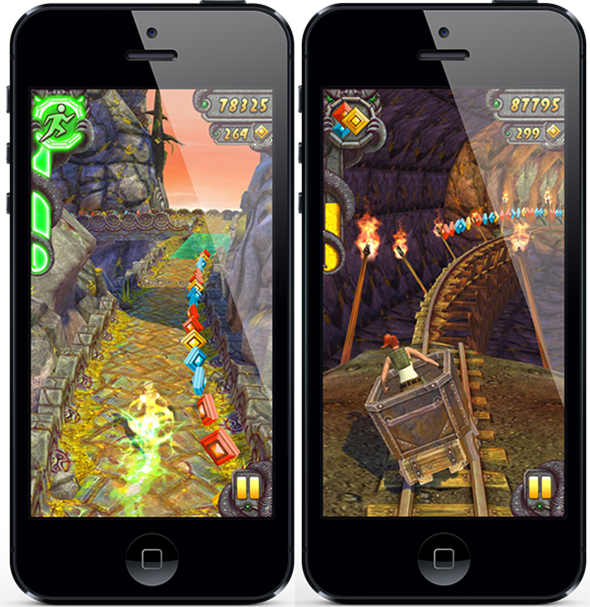 To put things into a little perspective, Angry Birds Space – part of the most popular gaming franchise of all time – took just under six weeks to hit the 50 million milestone, and although the Rovio hit was a paid app, take nothing away from the efforts of Temple Run 2.

Indeed, nobody has been more surprised by the positive response than Keith Shepherd, co-founder of Imangi, who said:

Temple Run has evolved into something so much bigger than us.. The game has performed beyond our wildest dreams, and we are thrilled that gamers and fans have embraced Temple Run 2 in such a short period of time.