Android users, if I were to ask you which app genre do you find most abundant in the Google Play Store, a lot of your answers would match when it comes to Twitter third-party clients. They’re actually flooding the Play Store these days, and despite the 100,000 token limit that Twitter has imposed upon third-party apps, they continue to thrive with people utilizing the different experience that such apps bring to the fullest.

Joining the ranks of such beautifully created and fantastic apps is Talon – another unofficial Twitter client coming courtesy of the developers of Sliding Messaging and EvolveSMS for Android. Since there can’t be anything unique other than the interface (it’s a Twitter client, after all), Talon takes full advantage of that with presentation of an interface that is completely thought out and implemented with Android in mind.

You get a beautiful and elegant card-style UI, profile images for users just like you see in Google+, slide-in navigation (including drawers that you’d pull from the side of the screen), and more. 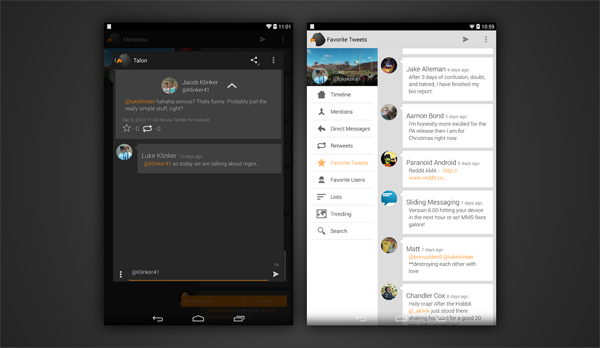 From a features standpoint, you get all the usual stuff like multiple account support, favorites, lists, blocking and adding users etc., and then some unique ones like background updates, dynamic notification system, full emoji support, do not disturb mode, in-line replies to tweets, dashclock integration and so much more. Indeed, Talon packs features that are more than a handful, and then adds some icing on top of it.

Going back to theming and interface, Talon features one of the most interesting theme engines that give room for third-party themes, should the app gain sufficient popularity. Likewise, within the app, it gives you light, dark and pitch black themes, and the layouts can also be switched between the traditional Talon one, or a more Hangouts lookalike. Text sizes and changeable to your liking, and the app comes with a Night Mode as well that makes reading in darker environment easier without playing around with the original theme. 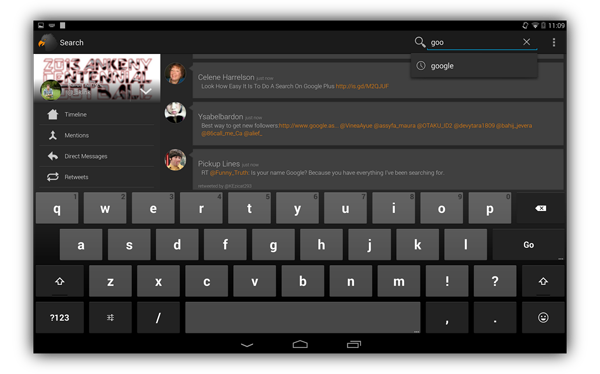 All of this spells great for Talon, but there is one major issue that I see with the app from a user’s perspective. Twitter’s token limit is bad enough to break many a good Twitter clients, and Talon doesn’t come free. The app is available on the Google Play Store for $1.99, and even though the developers are justified in getting paid for their hard work, I personally find it hard to understand as to why I would spend anything on an app that might not even work the next time I install it after upgrading my phone. Then again, Talon is rapidly gaining popularity since its release just 2 days ago, so the user community might disagree with me on this one.