Android has many advantages over its competitors that we don’t see anywhere else, one of them being the ability for users to change default apps for various actions, including something as basic as text messaging. It was due to the limitations and poorly-designed interface of the native Messaging app for Android that alternatives like Handcent and GO SMS Pro became so popular.

Then, we fast forward to a few months back and Google finally learnt a lesson, making SMS integrated with its Hangouts app and providing a unified interface for both online and carrier-based conversations. However, that spelled a few problems of its own.

If you’ve tried the SMS integration within Hangouts (it’s turned off by default, so you’ll want to enable it), it’s unusable as a daily driver, and that’s saying the least. While the idea was pretty awesome, it just doesn’t work with the way Google has it implemented right now. 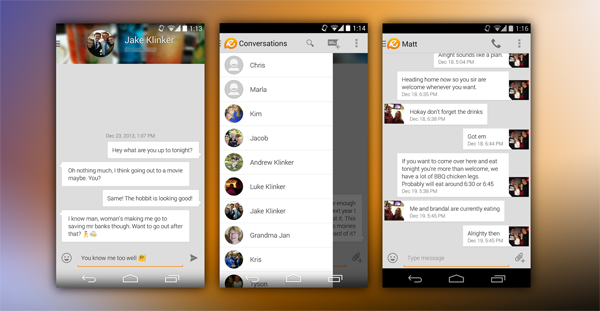 That, however, nowhere means that the interface is the problem; in fact, Hangouts has one of the best interfaces of all messaging apps that we’ve seen to date. This is where the new contender, EvolveSMS enters. Coming from the developers behind Sliding Messaging, EvolveSMS builds on unification of the best of both worlds by providing an independent SMS app that follows the design elements of KitKat and Hangouts, giving you the kind of experience that you’d have found missing in the Google alternative. 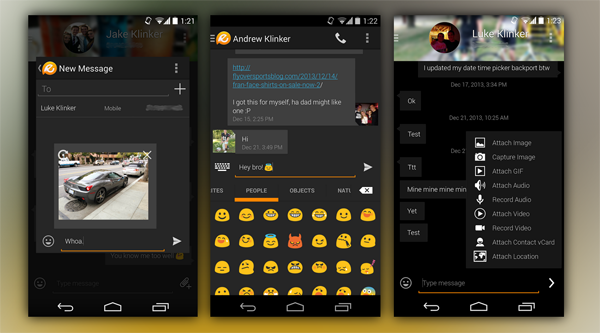 EvolveSMS allows the same slide to switch conversation scheme that made both Hangouts and Sliding Messaging famous, and sticks to the essence of text messaging, meaning that it’s free of extra features that would make the app laggy and would hardly ever be used.

Themes, emoji, group messages and private inbox are still available – something that most users will find beneficial. The most pleasing aspect, however, is how contact pictures make the header of each conversation in your list with a slightly blurred image, giving the whole experience a rather artsy look. It really cannot be described in words – you’ll have to see it to fully understand.

EvolveSMS is a free app available on the Google Play Store, and requires at least Android 4.0 to function. Grab it at the source link below.