Another supposed iPhone 5 part has appeared on a Chinese website and the blog is claiming that Apple’s next iPhone could actually feature a sliding keyboard.

According to AppleInsider, tw.apple.pro posted a photo of what appears to be a 30-pin dock connector cable from an unreleased iPhone, with the part number 821-1300-02 HF/c1. 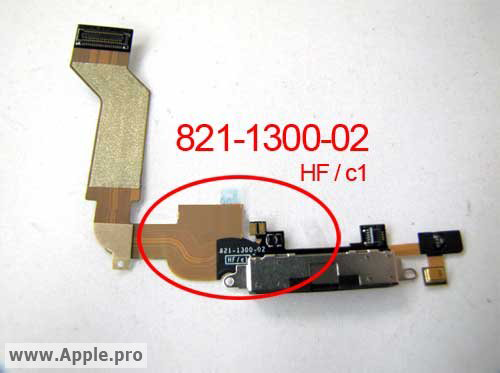 The Chinese site also goes on to claim that the recent rumors and indeed leaked parts of an iPhone sporting a 4-inch screen are in fact fake, while opening the possibility of an iPhone with a sliding screen – could Apple really be getting ready to offer a hardware keyboard?

This isn’t the first time tw.apple.pro has claimed an iPhone could get a sliding keyboard. Two weeks ago the same site said that Apple was working on a device that resembles the current iPhone 4, but with a new appendage. As we have mentioned in the past, this particular Chinese blog has had success in the past – they got their hands on the iPhone 4’s screen before Apple announced it.

While tw.apple.pro’s past success can’t be ignored, we at Redmond Pie still aren’t convinced Apple is going to go back on four years of keyboard-less hardware, especially when CEO Steve Jobs is on a personal mission to rid all Apple products of buttons entirely!