StyleTap has announced their new iOS Wrapper SDK which allows developers of Palm OS apps to easily rebuild their apps for iPhone and iPod touch. Details after the jump! 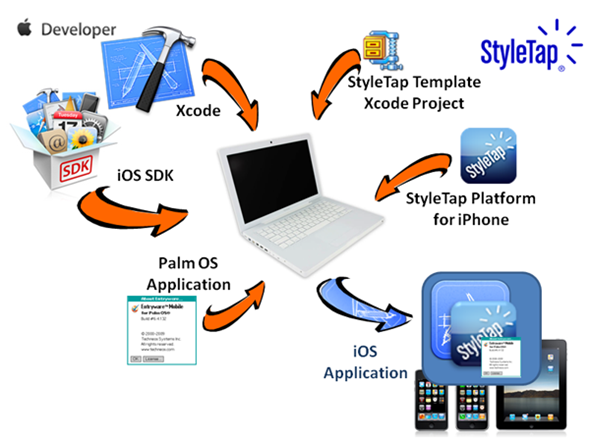 Named StyleTap iOS Wrapper SDK, the software development kit allows developers of Palm OS apps to wrap their app using StyleTap’s Platform for iPhone in such a fashion which allows it to be submitted to Apple’s App Store (where only those apps are let in that meet strict guidelines).

For the uninitiated, Palm OS is a mobile operating system developed for what were then known as Personal Digital Assistants (PDAs). The OS was mainly used by devices from Palm, Inc. until 2009 when they decided to shift focus to a completely new mobile OS called webOS. Palm, Inc. was later bought by HP and recently, because of dismal sales, HP decided to stop production of all webOS smartphones and tablets. webOS is now set to go open-source in the “near future”.

In March 2010, StyleTap released a Palm OS emulator for iPhone, iPod touch in the form of a jailbreak-only app. This emulator would allow anyone with a jailbroken iPhone/iPod touch to run most of the 30,000 apps or so that were written for Palm OS only.

Their new iOS Wrapper SDK uses a template Xcode (software used for developing iOS/OS X apps) project. Once developers provide .prc and .pdb files along with license information, they can convert their Palm OS app into an iOS app which they can then submit to App Store. Developers should know that StyleTap, understandably, does not guarantee acceptance of apps into App Store using their tool.

I personally don’t understand why anyone would want to use outdated Palm OS apps on their iOS device, but, apparently, a market does exist for this: organizations can use StyleTap’s Wrapper to implement Palm OS apps on iPhones in use by employees.

Be sure to check out our Mac Apps gallery to explore more apps for your Mac.