We’re not sure if you’ve noticed, but there was a brand new Star Wars movie released to the public a couple of days ago. You might have missed it, because there has been almost no mention of it on social media. Or the late night TV shows. Or billboards. Or the sides of busses.

Whoever said sarcasm was the lowest form of wit? 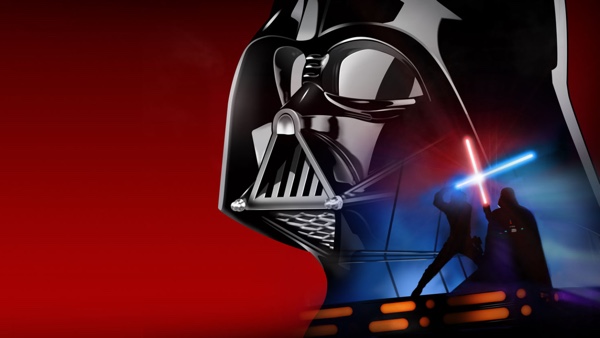 We are of course taking about Star Wars: The Force Awakens and its no doubt blockbuster opening this past Thursday. Star Wars fans flocked to the cinema in their droves to see the latest installment in a franchise that has had its bumps along the way but is currently full in a full on charm offensive. You can’t move without something Star Wars branded appearing in front of you, and that’s exactly how Disney likes it. The money Star Wars is raking in for Disney right now must be mind boggling.

If you’re a fan of the Star Wars universe and can’t wait to be able to watch The Force Awakens in the comfort of your own home then the movie is now available to pre-order from three of the biggest digital content providers of such things – iTunes, Google Play and Microsoft Store. 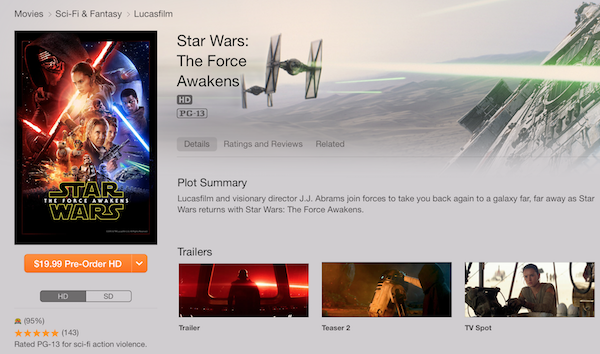 With no actual release date listed across any of the three stores, we’re a little surprised that the entries have popped up at all given what we would imagine to be a fairly lengthy pause between now and the movie being made available for home viewing. What we do know though is pricing, with both iTunes and Google Play selling the HD version of Star Wars: The Force Awakens for $19.99, though Microsoft wins this round with its price of $14.95 whether you choose HD or SD. You’ll be able to watch that back on your Xbox One too, which is probably worth bearing in mind if you want to be able to watch on a big-screen TV and don’t have anything capable of doing so with iTunes or Google Play content. 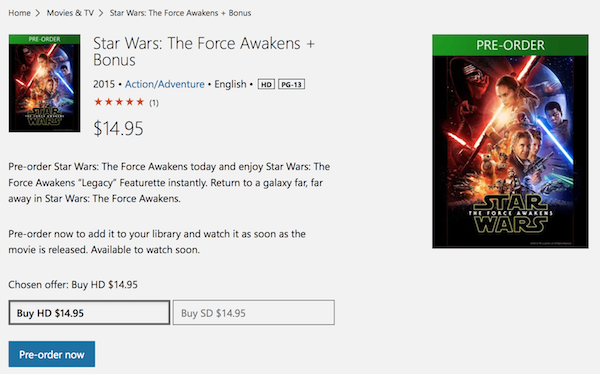 Quite what the need is to pre-order digital content that simply streams upon viewing, we’re not quite sure, other than someone at Disney wants to get the big numbers for the opening weekend. But we’re probably just being cynical!