We don’t know if you’ve heard, but apparently there is a new Star Wars movie out at theaters right now. In all seriousness, the likelihood is that you have been well and truly caught up in the Star Wars hype that culminated with the movie’s release this week to critical acclaim. If you’re in the mood to consume the music that accompanies the film, then you’re in luck as the original motion picture soundtrack from Star Wars: The Force Awakens has now been released onto Apple’s iTunes and Apple Music platforms. That means that it’s officially available for both purchase and streaming at your own leisure.

The motion picture soundtrack seems to represent excellent value for money for the hardcore Star Wars fan who wants to add the original score to his/her collection of memorabilia. The tracks appears to be placed onto the album in the time-based order that they appear within the new movie, totaling 23 individual tracks all composed by legendary composer John Williams. 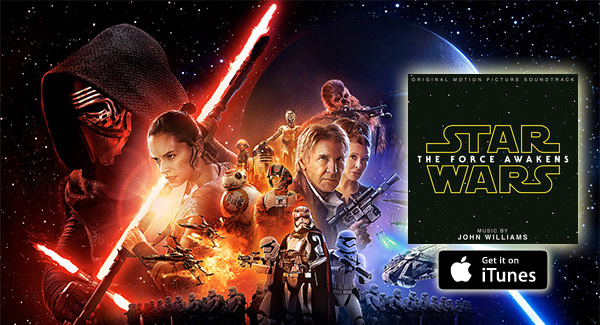 Here is the complete track list which should give you approximately 78 minutes of entertainment:

The release of the official soundtrack to the worldwide phenomenal movie comes after Apple had tried to build excitement for the launch through its Apple Music service. There’s been a Star Wars-themed radio station delighting the franchise’s ever faithful following for the last few days as anticipation for this release grew. There’s also the fact that all six of the original Star Wars movies were released digitally back in April of this year. 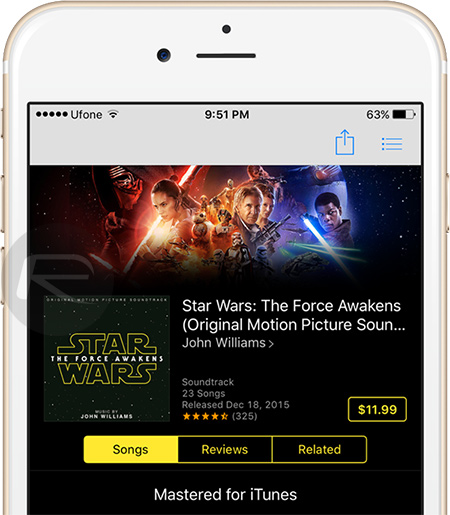 Those with active Apple Music accounts can access and stream the original motion picture soundtrack right now as part of their monthly $9.99 subscription. Those who haven’t yet jumped onboard the Apple Music bandwagon can purchase the album directly from the iTunes Store for a one-off $11.99.