On the face of things Apple may seem like a very public facing and open company. You don’t seem to be able to turn around without seeing one of the company’s iconic products. The TV is full of emotive advertisements that make a connection with the public. Even celebrities are starting to become more vocal in promoting the Cupertino-based giant. But even though it has this very public-facing persona, most of its work done behind closed doors, is shrouded in as much secrecy as possible. That well-respected secrecy is what makes the fact that we will get a rare glimpse inside of Apple’s design studio this Sunday, even more exciting.

Charlie Rose was hand-picked by Apple earlier this year to tour the internal design facility that is operated and maintained by Jony Ive and his team. We’ve seen internal glimpses of Apple’s Cupertino headquarters in the past, but we’ve never before witnessed a journalist being afforded almost unlimited access to such a well-guarded internal department. The glimpse of what goes on in Ive’s sanctuary within Apple HQ is essentially a follow-up to an interview between the two dating back to 2013.

The footage that was captured as part of the design studio tour with Jony Ive and Charlie Rose is set to air this coming Sunday, December 20, on the extremely popular CBS show 60 Minutes. The show’s official Twitter account has been attempting to raise excitement levels ahead of the airing by posting a number of teasers stating that “@CharlieRose goes inside Jonathan Ive’s secret design studio at Apple headquarters, Sunday on @60Minutes”. That particular tweet also has an accompanying image that shows the journalist and Jony Ive together, deep in discussion inside of the secret studio.

In addition to seeing how Ive goes about his daily basis, the footage also promises to include a fairly detailed discussion with Angela Ahrendts. Apple’s head of retail will be offering some insight into Apple’s plans for the future relating to the company’s network of retail outlets, as well as providing a glimpse of the company’s “store of the future”. We’ve noticed a shift in the internal design language used within newer retail stores and it looks as though that is going to continue to evolve. 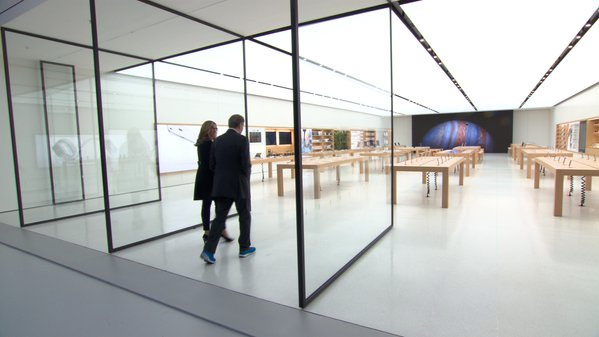 The Apple-centric 60 Minutes episode will air this coming Sunday, December 20 at 7:30PM ET and 7PM PT on CBS in the U.S.