Apple made iOS 9.2.1 beta 1 available to developers this week, with the first beta release also pushed out to those that are part of the iOS public beta program. Details as to what the current beta includes are scarce, though we don’t think it is a stretch to suggest that bug fixes will make up most of the changelog at this point.

As is always true of new iOS releases, those with older iPhones and iPads will be looking on with great interest, hoping beyond hope that their ageing devices will get a new lease of life. Apple has been known to add performance enhancements for older devices to its iOS releases, and if you’re using an old iPhone or iPad that’s using old technology then you tend to be happy to get all the performance boosts you can. 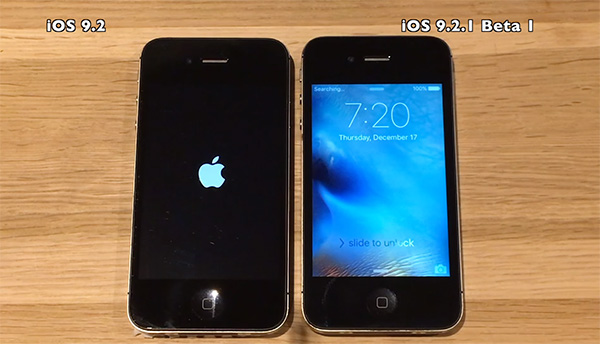 In a host of new videos by iAppleBytes which are embedded below, you can sit back and watch as iOS 9.2 and iOS 9.2.1 beta 1 are compared across a range of tasks on devices as old as the iPhone 4s. If you’ve ever seen an iPhone 4s try and keep up with today’s modern iPhones, you’ll understand why performance is so important on these old devices.

From watching the videos, it would appear that iOS 9.2.1 beta 1 is marginally quicker to perform certain functions than the currently shipping iOS 9.2. The reasons for that are unknown and it’s possible these results are simply within an acceptable margin of error, but we can only judge these things on what we’ve seen – so far, in its first beta release, iOS 9.2.1 looks like it may be the kindest to older iPhones yet.

We’ll see where subsequent betas and the final release leave us. Watch all side-by-side comparison videos below to get a feel of how the latest stable release compares to the aforementioned first beta on the iPhone 4s, iPhone 5 and the iPhone 5s.