Springtomize For iOS 10 Being Tested For Beta Release

There are tons of tweaks, extensions, and packages which are all currently available for jailbroken iOS 10 devices. Developers have literally been falling over themselves to push out updated versions of their apps and tweaks, and even create new experiences for all of those devices thanks to the availability of yalu102.

That’s all well and good, but it seems that one of the most popular packages available prior to iOS 10 is about to enter the beta process, with the developers of Springtomize confirming that excellent progress is being made with the latest iOS 10-compatible version. 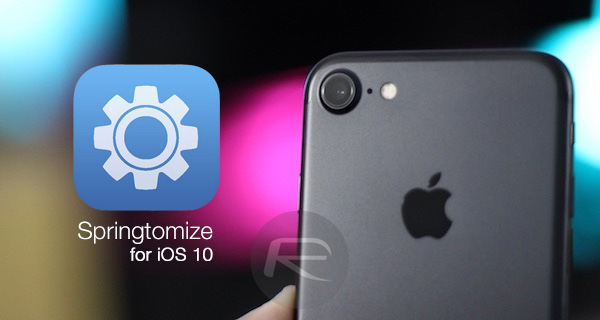 Anyone with any recent experience in the world of jailbreaking will be not only be familiar with Springtomize name, but also the developers behind the package and the type of much-needed and appreciated functionality that it has brought to jailbroken devices over the years.

With iOS 10 now approaching version 10.3, and yalu102 being extremely stable on iOS 10.2, developers Filippo Bigarella and Janosch Hubner have taken the opportunity to let the world know that Springtomize for iOS 10 is coming, but more importantly, that users also have an opportunity to impact its feature set with suggestions and recommendations.

Springtomize has offered support in one form or another for devices running iOS 7, iOS 8, and iOS 9, with iOS 10 support now being a case of sooner rather than later.

The tweak may allow device owners to instantly customize multiple facets of the iOS experience with what can only be described as relative ease, but it has been the regular updates and user-support which has made Springtomize a huge success over the years.

There’s no provided timeline for a beta or public release or even if the beta will be open to public testers, but it’s definitely a step in the right direction to get an official dialogue going on with the fact that an iOS 10 compatible version is actually in the works.

If you are a Springtomize user, but also have suggestions about how it could be improved, then you can let the developers know right now.