Speed Test: iPad Pro 12.9-Inch Vs 9.7-Inch Vs Every iPad Model Ever Released

If you happen to be an iPad owner, have you ever wondered how the hardware that you use on a daily basis compares against earlier versions of the product. Every generational release is supposed to improve on the last, and therefore provide a more pleasurable experience to the end-user, but is that always the case? Have we become accustomed to just trusting manufacturers when they wax lyrical about performance enhancements and the benefits they provide to us? If that has been playing on your mind, then you no longer need to live in wonder as a new speed test video shows every iPad ever made compared to each other.

It’s fairly hard to believe that the original iPad was introduced six years ago back in 2010. In the time that has followed, Apple has not only progressed the 9.7-inch tablet through multiple generations, but has also introduced the iPad mini range, as well as the new 12.9-inch iPad Pro that made an appearance late last year aimed predominately at the professional enterprise market. It was then followed by the 9.7-inch iPad Pro as well which was announced this year. 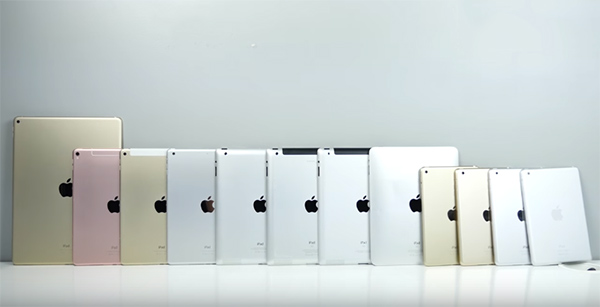 This latest video from a popular YouTuber, takes every iPad ever released and puts them through a variety of tests, and while the test may not be entirely scientific in nature, it does give us a good reflection of how the iPads will compare to one another in the real world today, and yes, it also includes the 9.7-inch iPad Pro.

The tests are as following:

And for those that are interested in just how many iterations of the iPad Apple has gone through, the hardware that is shown lined up in the video is as follows:

It’s hard to believe, and actually quite surprising, that we’ve had a total of twelve iPad models hit the market in the last six years. It isn’t surprising however to learn that video tells us what we may have been able to guess, and that Apple’s modern iPad devices are clearly the best route forward for anyone looking for high-end performance.

Check out the video for yourself and see what you think? Would you trade a little bit of performance in order to save money by purchasing an older iPad? Let us know in the comments section below.