At the IFA 2013 Press Conference today, Sony unveiled a bunch of new gadgets, such as the waterproof Xperia Z, including the much hyped DSC-QX10 and DSC-QX100 Cyber-shot smartphone lens cameras. Both the devices are scheduled for availability starting September 27, based on Amazon’s official listing, and are going to provide “DSLR-quality shooting from the convenience of a smartphone”. Let’s take a deeper look at both these models right after the break.

In a nutshell, both the devices are basically attachments for iPhone and Android smartphones coupling in-built image sensors and lenses, making the phone behave like a dedicated point-and-shoot camera. The QX10 is the basic model, offering a 4:3 aspect ratio 1/2.3” Exmor R CMOS image sensor, with effective resolution of 18.2 megapixels. It features an optical zoom of 10X, with an aperture range of F3.3 to F5.9 at the telephoto end. The shutter speed varies from 1/1600 sec to 4 seconds, which makes the accessory excellent for low light photography. Supported ISO range is 100 to 12800, although the latter becomes pretty much useless owing to high-level grain that will seep through the image.

The DSC-QX100 is the elder sibling, borrowing the 20-MP sensor from RX100 Mark II camera, with the sensor size going up to 1” for better image quality. Supported aspect ratio is 3:2, while the aperture range goes form an impressive F1.8 to F4.9, giving the resulting images an even shallower depth of field and making them closer to what you’d get with a DSLR. The lens accessory also comes with aperture priority mode for advanced users, while manual focus is also on-board for even better level of control on output. Exposure compensation goes from -3.0 EV to +3.0 EV, while the ISO range varies from 160 – 25600. Video recording capabilities for QX100 remain the same as for QX10. 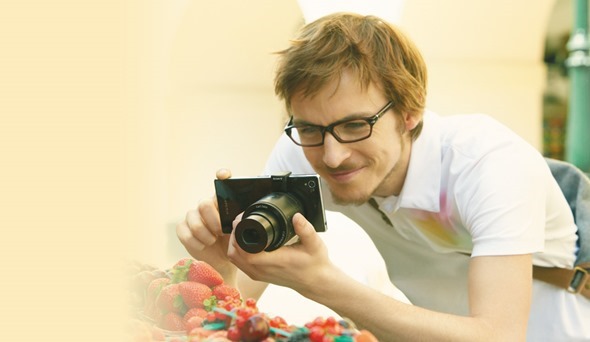 Both the devices will be compatible with Android smartphones running OS version 2.3 – 4.2, while iPhones require iOS version 4.1 – 6.0. Connectivity is established through either Wi-Fi or NFC. Of course, it requires an app for connectivity which serves as the camera interface, and is called PlayMemories, and is available to download from the iTunes App Store and Google Play Store for iPhone and Android, respectively. 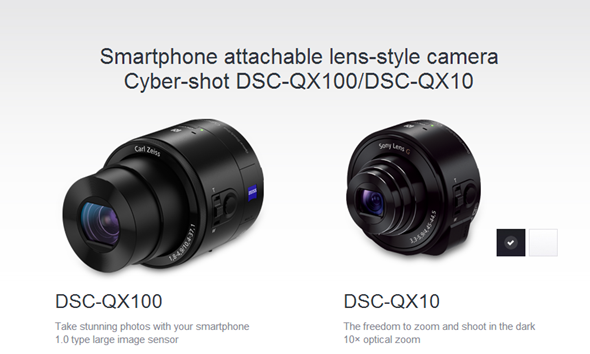 On the pricing front, the QX10 will be sold (by Amazon, at least) at $248, while the elder sibling, the QX100, will cost you a hefty $498. This is what an entry-level DSLR would cost you (even less), so unless you see a huge value in being able to take photos with your smartphone, and unless the lenses actually produce images on par with dedicated cameras, these accessories might not find that much love from consumers.