One of the biggest benefits of owning any smartphone or tablet is the powerful functionality that it gives us in the palm of our hands. We take things like text message, phone calls and e-mails for granted, but if you had suggested fifteen years ago that we would have devices like the Apple iPhone or the Samsung Galaxy S II that were capable of sending e-mails, taking photographs and anything else you can think of then you would have been laughed at and accused of wishful thinking.

However, we are currently living in that wishful world and as consumers, being able to send e-mail from our phone or tablet is the bare minimum we would expect – something that someone should have told RIM when they released the PlayBook. E-mails are generally one of the main accepted methods of communication these days, being a commonplace amongst friends, family members and colleagues, but what if you could send an e-mail with total transparency, with the recipient not having a clue who it was from?

Well, if you are a user of an Android powered device, then thanks to 2SimpleCreations you can do just that. Their Fake Mailer application has hit the Google Play store and allows entirely anonymous e-mails to be sent to any email address, with the body content of your choice. I am pretty sure that there are people who might have actually created a new e-mail account under a fake name in order to send an e-mail to someone for one reason or another, but that needs to happen no more with the Fake Mailer app. I would be extremely keen to stress that although Fake Mailer does allow users to effectively send anonymous e-mails to anyone they want, that doesn’t mean that it should be used for the pursuit of evil or anything that could be deemed unethical or wrong. 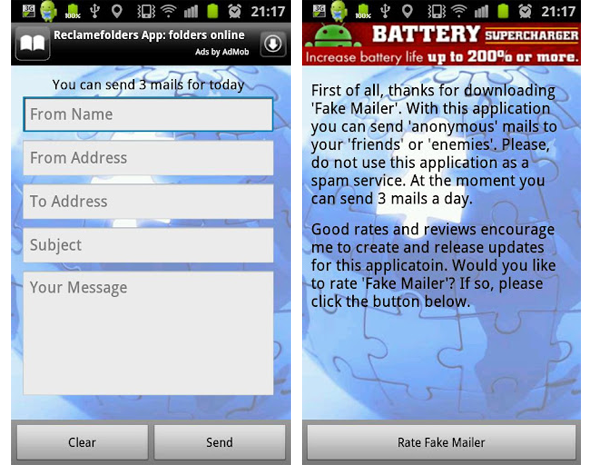 With that said, we are fast approaching April Fools Day, the only day of the year when it becomes acceptable to prank and play tricks on those around you. Fake Mailer would be the perfect app to send an e-mail to a friend or a colleague informing them that they have won the lottery, or their wife has left them for another man. The current version of Fake Mailer allows users to send a limited three e-mails per day, with the promise of more and new features to be added if feedback is left through the Google Play Store. The app is as simple as entering the recipient name, address and body of the message, as well as the sender’s fake name and e-mail address.

While the app is a bit of fun, the developer has seen fit to place a few terms of service on the store, which are worth re-iterating as I know the real-world damage that can be caused by apps such as these:

If you are happy to comply with those terms of service, and see a world of fun fill anonymous e-mailing ahead of you, then Fake Mailer could be the application you have been craving.