Android was known in the past for looking terrible compared to the more elegant looks of iOS and the now dead webOS. Things have indeed improved significantly over the past few months, thanks to a UI overhaul in Ice Cream Sandwich and a significant boost in smoothness with Project Butter in Jelly Bean.

I prefer the stock UI myself, but there are plenty of people out there who love tinkering around ROMs, launchers, icon packs etc. for the perfect look. We’ve covered plenty of themes for Android in the past, with this one covered just a couple of weeks ago.

We’ve come across an all new theme today. The person behind it – who goes by the name of RJT – calls it the Dark Jelly theme, and it looks absolutely stunning! What it does is turn essentially every element of your Galaxy Nexus’ UI into black and white, with a little Holo Blue thrown in for elements that need to stand out.

Unfortunately, as awesome as it looks, it takes a good amount of time and effort to recreate the look on your own device.

In order: you will need to have a rooted Galaxy Nexus with ClockworkMod Recovery installed, flash the JellyBro ROM, install the DarkJelly theme for the black-on-white look, buy the paid version of the popular Nova Launcher to adjust the position of icons and customize the launcher, the DroidIcon Pack for the icons, and, lastly, the Simple Text Icon Creator for the Call, Text, Mail, Work text-based shortcuts on the home screen.

Since the theme is dark throughout, using bright apps with white background will be jarring. The best solution to this is to search for edited versions of popular apps that come with a darker UI. 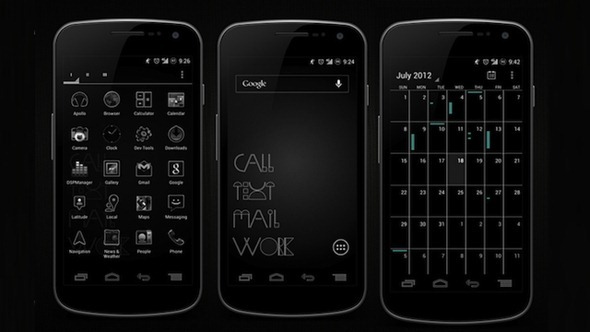 Another reason for why you might want to go for darker versions of apps is because with AMOLED-based displays (like the Galaxy Nexus’ Super AMOLED HD display), less power will be used resulting in better battery life.

What do you think about the theme? Have any ways of improving it or, perhaps, have an awesome theme of your own to share? Let us know about it on our Facebook / Google+ page, or send us a tip.