This Is The Best Android Theme We’ve Seen So Far, Here’s How You Can Get It On Your Smartphone

Theming is a popular hobby on smartphones like iOS and Android because of two basic reasons. Firstly, it takes less of a toll on system performance than some of the skin packs on desktop operating systems (at least in my personal experience) and, secondly, it’s much more easier, module-based and can result in a significantly different user experience. iOS users can download themes and use Springboard editors from Cydia after jailbreaking, while Android users get to do most of their theming without even getting root access (although rooting can open many other ways to customizing your device’s overall look).

We don’t cover Android themes often here at Redmond Pie, but one theme achieved by Reddit user kingerp from the Android Themes sub-community really clicked with us. Check it out after the jump.

The theme can be described in two* words: typography-centric and minimalistic. It uses simplified white icons, text and widgets and a lovely background that results in a stunning home screen which looks anything but the Android OS of 2.1 Éclair and earlier.

Currently, there is no way to get your home screen to look like this in one-click. You will have to install apps like Nova Launcher (set it to 7×7 grid without a dock), BobClockD3, Circle Battery Widget, Minimalistic Text weather widget, wallpaper, and icons from DeviantArt. Additionally, you will need WidgetLocker to customize the lock screen and you may use Phantom Music Control to automatically hide music buttons when not in use. All of these apps, tweaks and widgets are readily available from the Google Play Store.

This is the end result after playing around with each app’s settings: 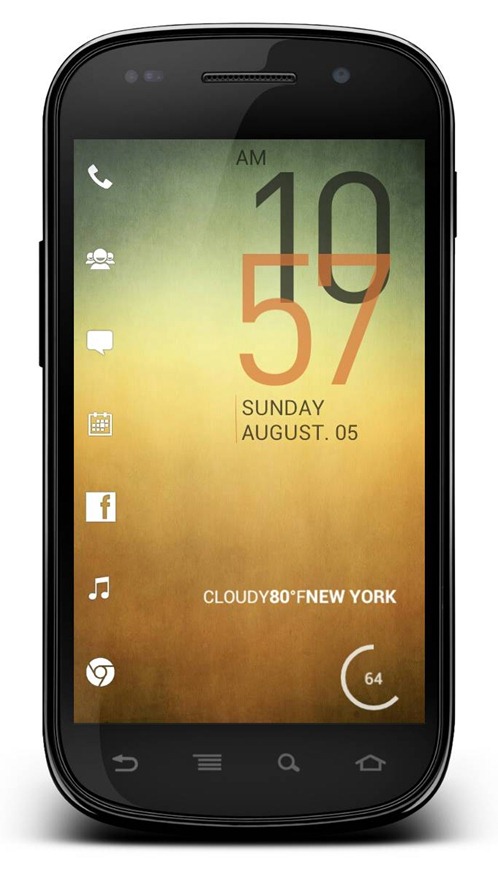 With so many hundreds upon thousands of tweaks and widgets available, you can make your Android smartphone / tablet’s looks absolutely unique. Those who get into hardcore theming of their Android device have a hard time settling down on the perfect setup since there is always something that they feel is missing.

Besides using tweaks and widgets, Android enthusiasts can flash new ROMs like MIUI or CyanogenMod that offer their own completely unique look and theming options. This is a more radical example of theming, and it requires you to gain root access to your device first.

*That may just be three words after the colon. Darn it! I should’ve counted first.