Samsung’s long tradition of using Apple’s own advertising campaigns against it shows no sign of abating with the recently introduced ‘Wall Hugger’ line of TV ads, but now the Korean firm has gone a step further by moving its campaign to a new battleground – the airport power outlet.

The gist of Samsung’s ‘Wall Hugger’ campaign is a simple one and focuses on the fact that the firm clearly believes that iPhone owners need to charge their phones more often than those who carry its own handsets. It may have a point in fact, though the reasons for that will be argued between fanboys for the foreseeable future. What Samsung is 100% right about though is that if you find an airport charging station, you’ll probably find an iPhone, too. 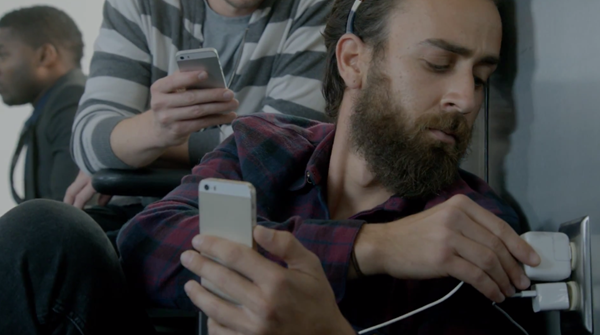 Which is why its latest move makes so much sense. Moving its new ad campaign from the small screen, Samsung has rebranded some airport charging stations with its own ads, mocking Apple’s current ‘You’re strong than you think’ ad campaign.

Samsung’s ad reads “Samsung Galaxy S5 with Ultra Power Saving Mode. So you have the power to be anywhere but here. ”

Samsung’s Galaxy S5 has the ability to turn its screen brightness down, turn off various radios and generally turn itself off one feature at a time in order to conserve battery life, something it seems very proud off. We’re not convinced that taking features away is the best way to save power ourselves, but who are we to argue? 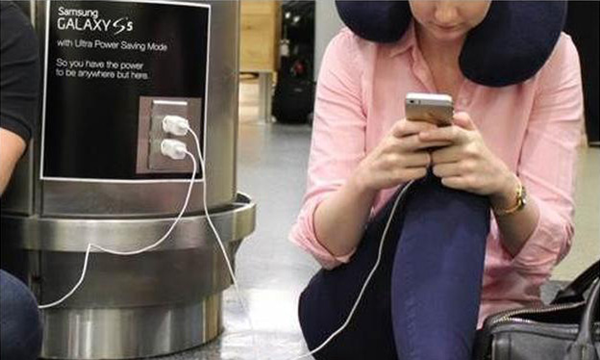 With Samsung spending a huge amount of money on global advertising each and every year, you can only assume that it believes that such brash ad campaigns work, though we’d like to see numbers to reflect that. Either way, there’s probably an ad man sat with a whiskey I’m his hand somewhere who’s very pleased with himself indeed.