Samsung doesn’t usually need any encouragement to do a spot of advertising, and with an ad budget that probably rivals the best of them it has started go use some of those dollars to poke yet more fun at Apple.

Far from averse to ribbing its biggest rival in Apple, not to mention its customers, Samsung has not started a new campaign that revolves around its new Galaxy Note 4. Instead of simply trying to sell the phone on merit though, the Korean firm has decided to take the opportunity to take a pot shot at the iPhone 6 Plus, Apple’s newest, and largest, iPhone. 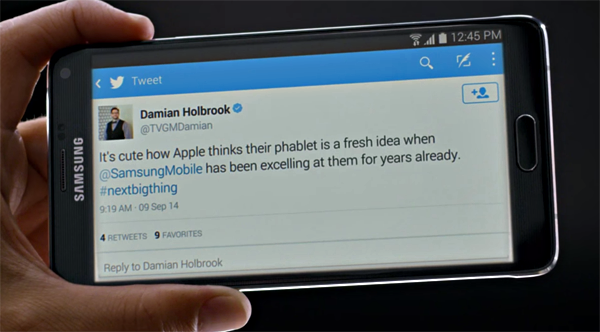 The ad itself reminds viewers that Samsung was the first to sell a so-called phablet, and while people did initially poo-poo the idea, even Apple has now decided to copy it. Those same detractors are now lauding the iPhone 6 Plus – a fact that apparently irks those in Samsung’s advertising department.

Samsung’s obsession with Apple is nothing new, and the firm has made the iPhone maker and those that buy its wares the butt of many an advertising campaign over the years. It’s no surprise that the announcement of two new flagship smartphones from Apple set the Samsung advertising wheels in motion.

Interestingly, Apple CEO Tim Cook seems less interested in Samsung than Google, with Steve Jobs’ successor telling Charlie Rose that the Android maker is its main competitor, rather than Samsung. Apple recently opened pre-orders for its two new iPhones, and Cook was on Rose’s show as part of Apple’s current media offensive.

Both the iPhone 6 and iPhone 6 Plus go on sale this coming Friday, and are both already sold out of pre-order slots. Regardless of advertising campaigns, we suspect Samsung would kill for such s launch.

Check out Samsung’s rather cheesy ad down below in its entirety. Though it’s an eyebrow raiser, but nonetheless entertaining in a lot of ways.

What do you think? Do you believe Samsung nails the whole phablet situation with its Galaxy Note lineup of phones, or should the Korean giant be worried what its Cupertino counterpart is doing?